Wow! Your class report’s so neat and organized.

You managed to divide your Google Docs document into 2 columns to make your paper look like a newspaper.

How exactly did you do that?

Well, if you’re curious how to make 2 columns in Google Docs, stay tuned and continue reading.

How to Make 2 Columns In Google Docs

To make 2 columns in Google Docs, first head to “Format.” Then, hover your cursor over “Columns” to activate another menu. From there, choose the 2-column image. If the document already has text, highlight the text you want to divide into 2 columns before repeating the same steps above.

Making 2 Columns In Google Docs — How Best to Do It

Making 2 columns in Google Docs isn’t as complicated as it seems. You only need to know what buttons or tabs to push for you to achieve the feat.

But, creating 2 columns in Google Docs varies depending on whether there’s text in the document already or not.

So, to make things easier for you to understand, let’s start explaining the process using a blank document first. 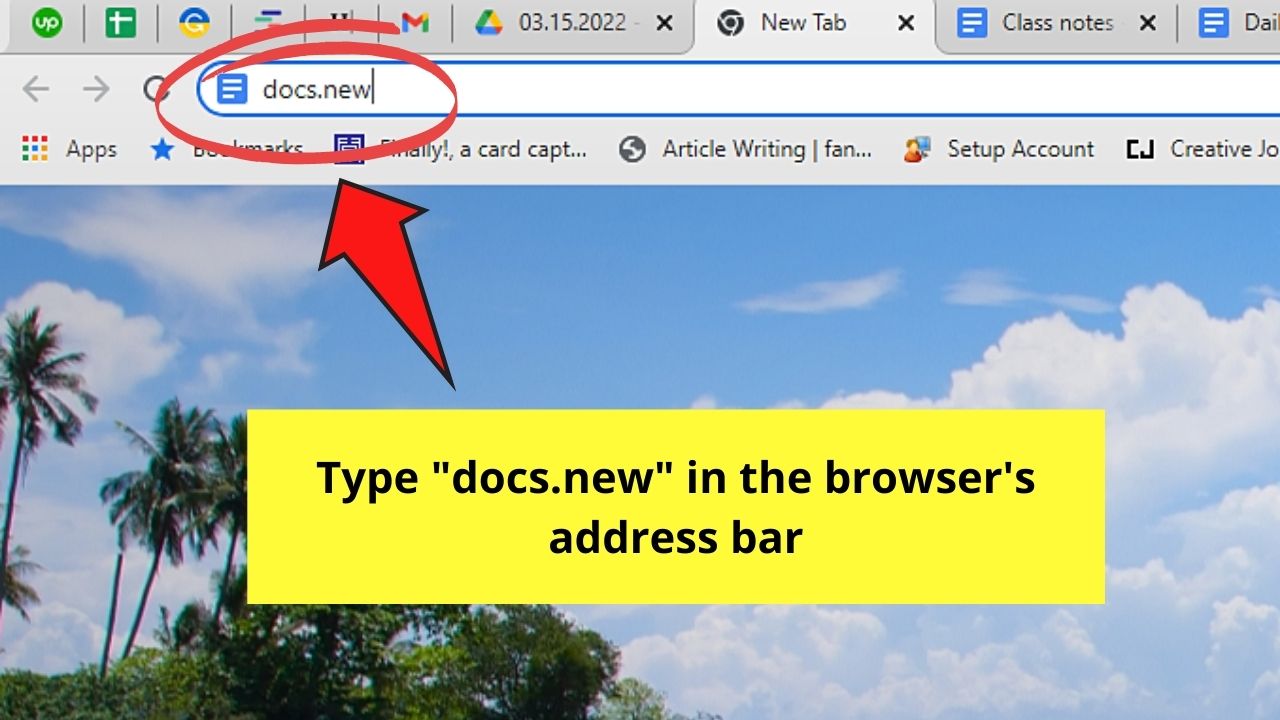 The tab will then load into the new Google Docs document.

You can also open a blank document by opening Google Docs and selecting the “Blank” page. 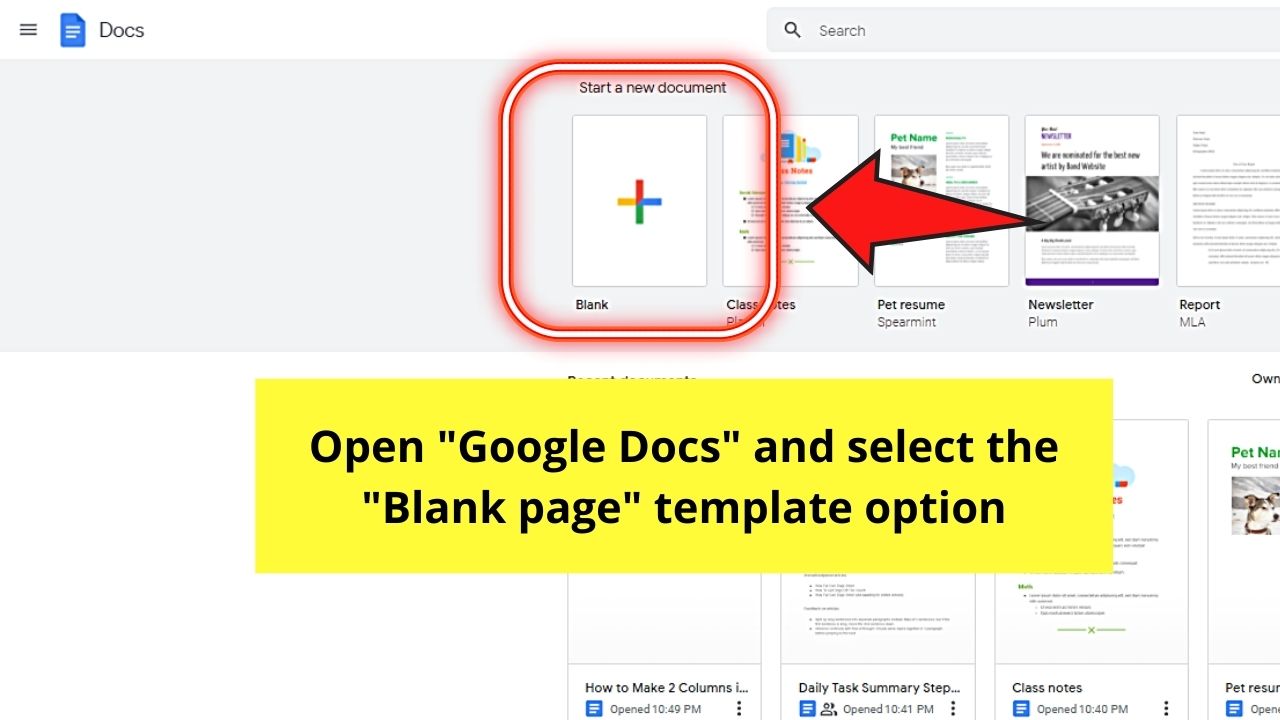 Step 2: Once you’re on the new Google Docs file, head to the menu bar and select “Format.” 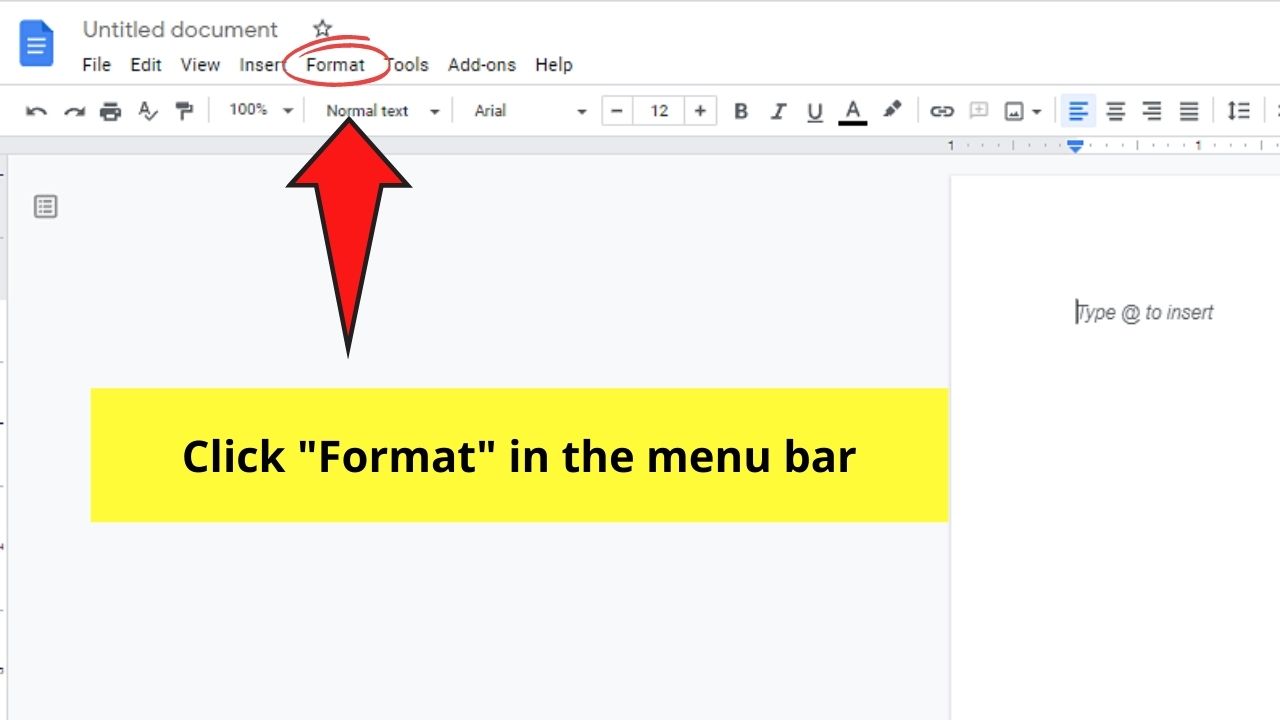 A dropdown menu will then appear offering you various formatting options.

Step 3: In the “Format” dropdown menu, scroll down until you see the “Columns” option. 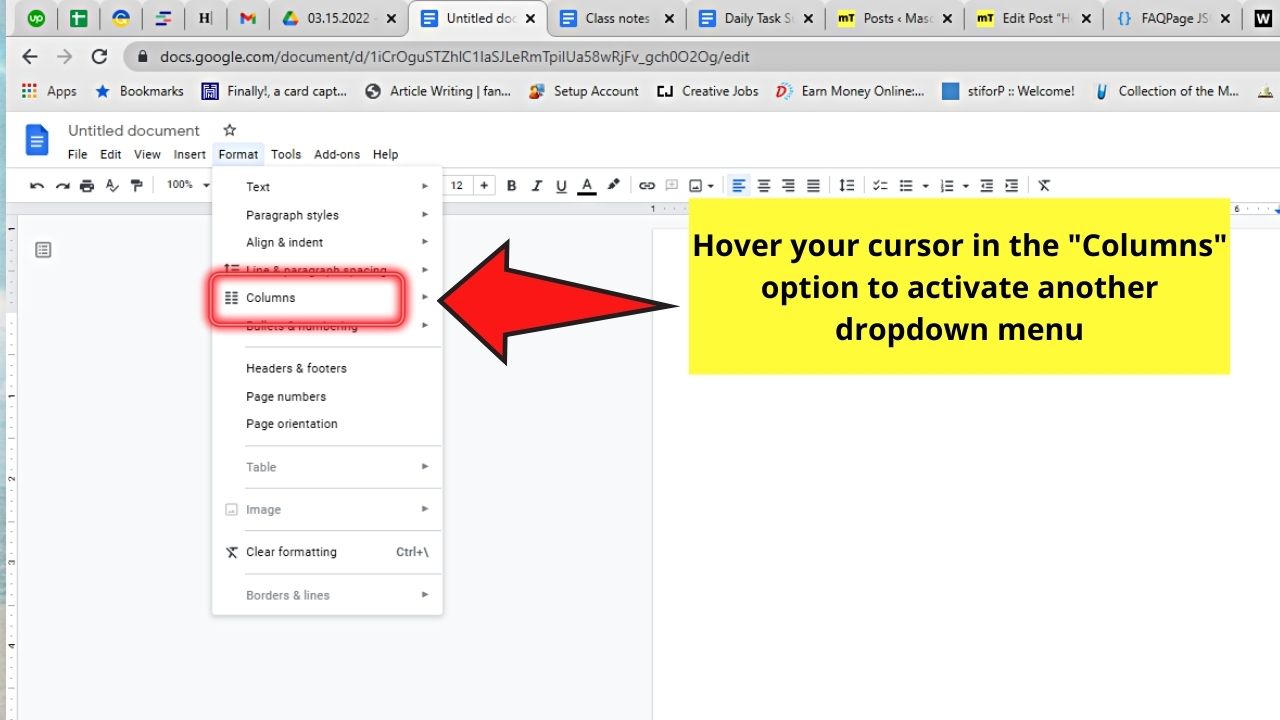 After locating the “Columns” button, hover your cursor over it to activate another dropdown menu. 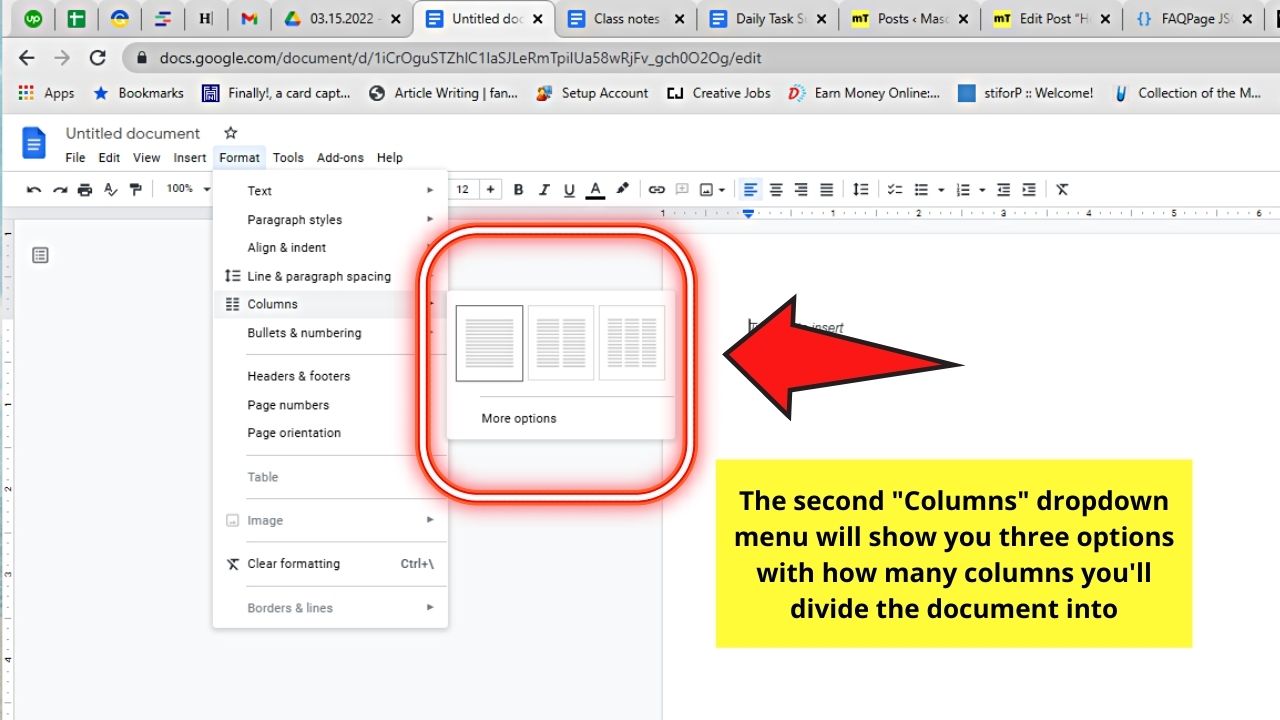 Since we want to make 2 columns in our Google Docs document, choose the 2-column image by clicking it. 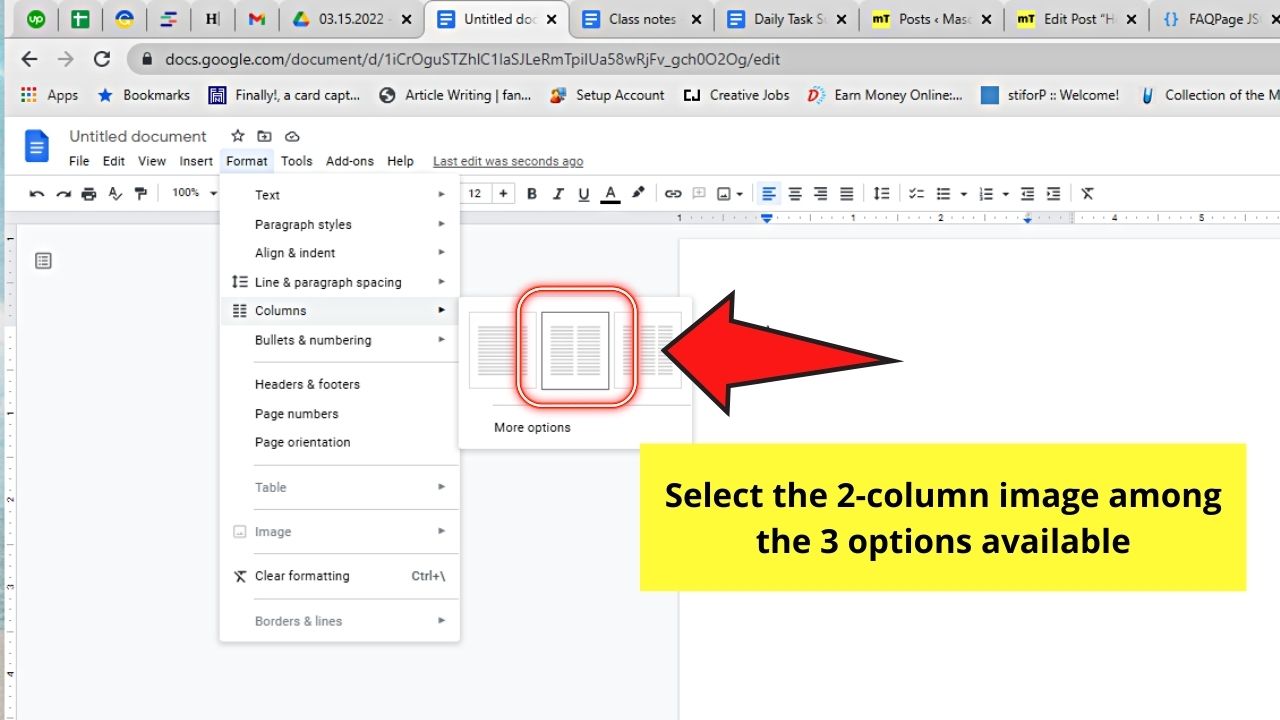 This move then divides the document across all the pages into 2 columns.

Step 5: If, however, you want to add a vertical line between the 2 columns in Google Docs, head back to click “Format” on the menu bar. 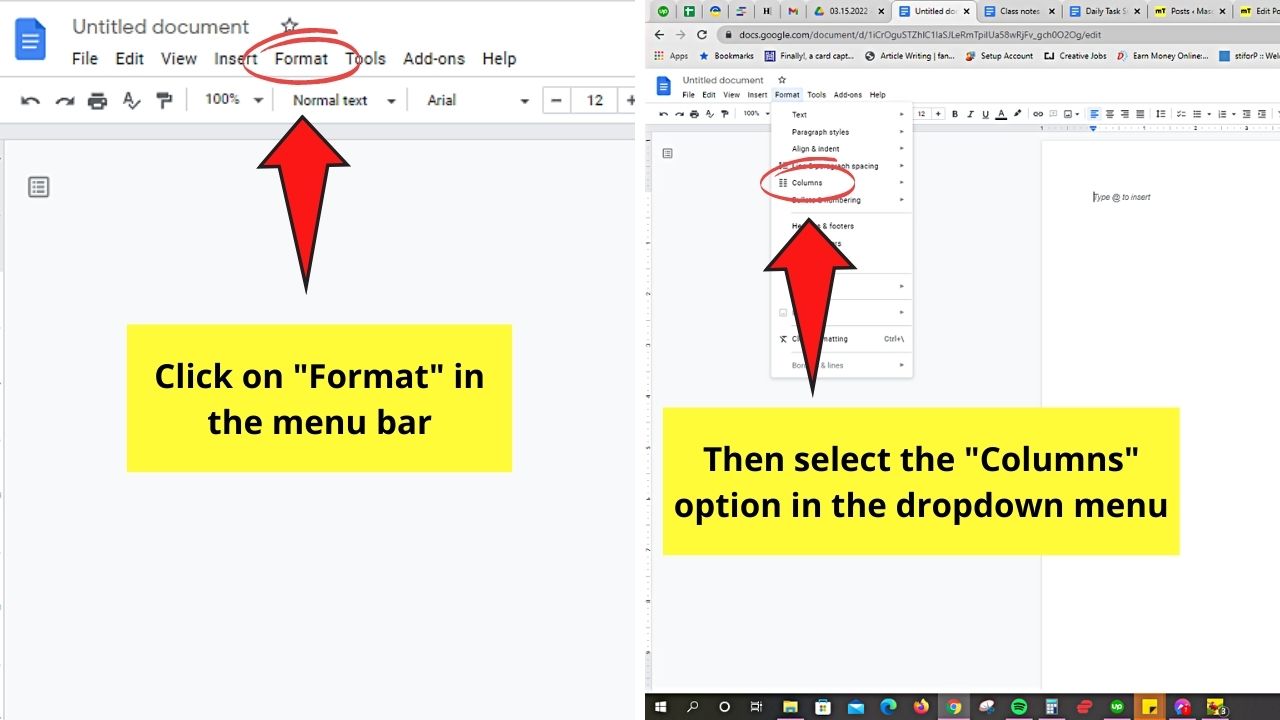 But, instead of selecting the 2-column image, go downwards and click “More options” instead. 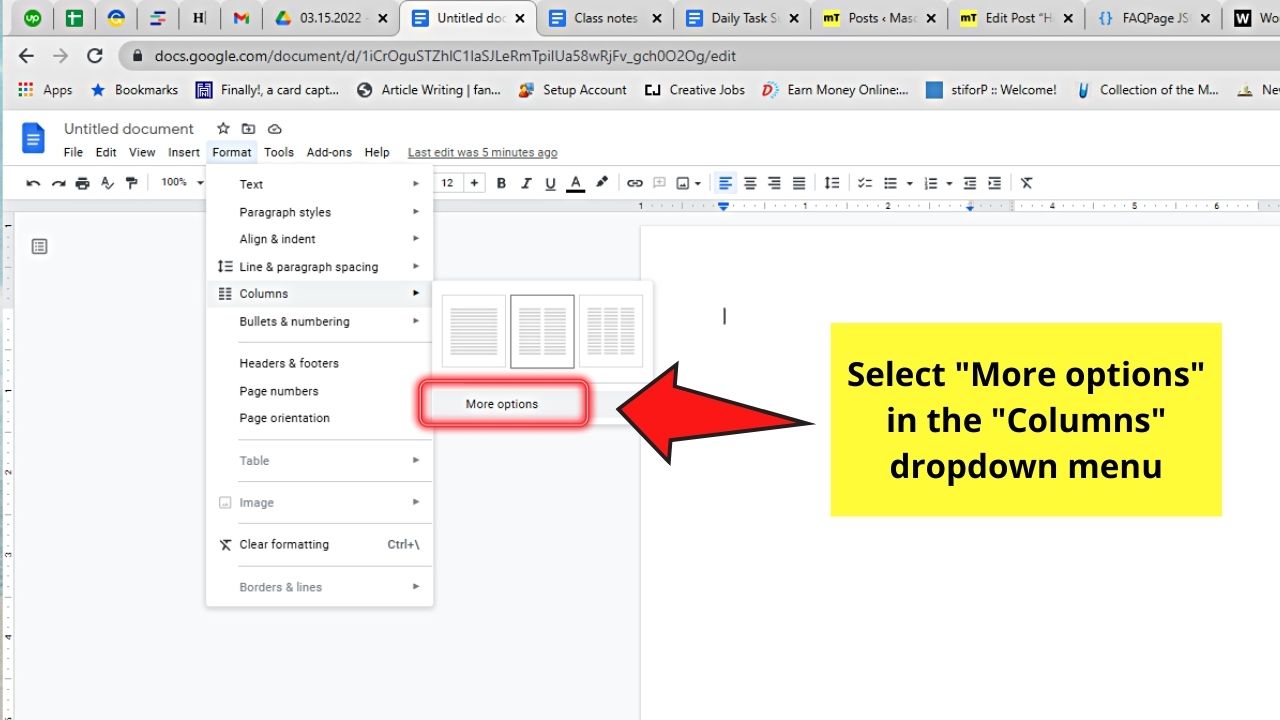 Step 6: In the “More options” dialog box that appears, head to the “Line between columns” box and tick it. 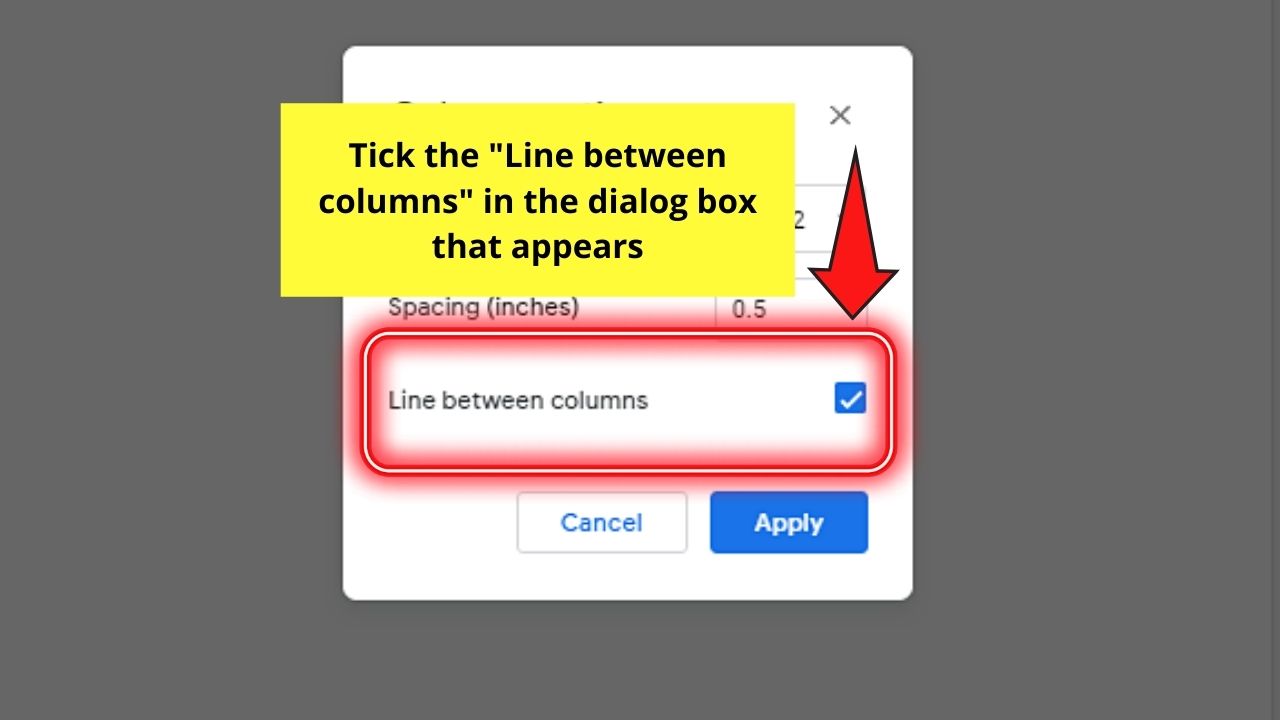 Then, if you’re good with the settings for the “Number of columns” and “Spacing,” click the “Apply” button. 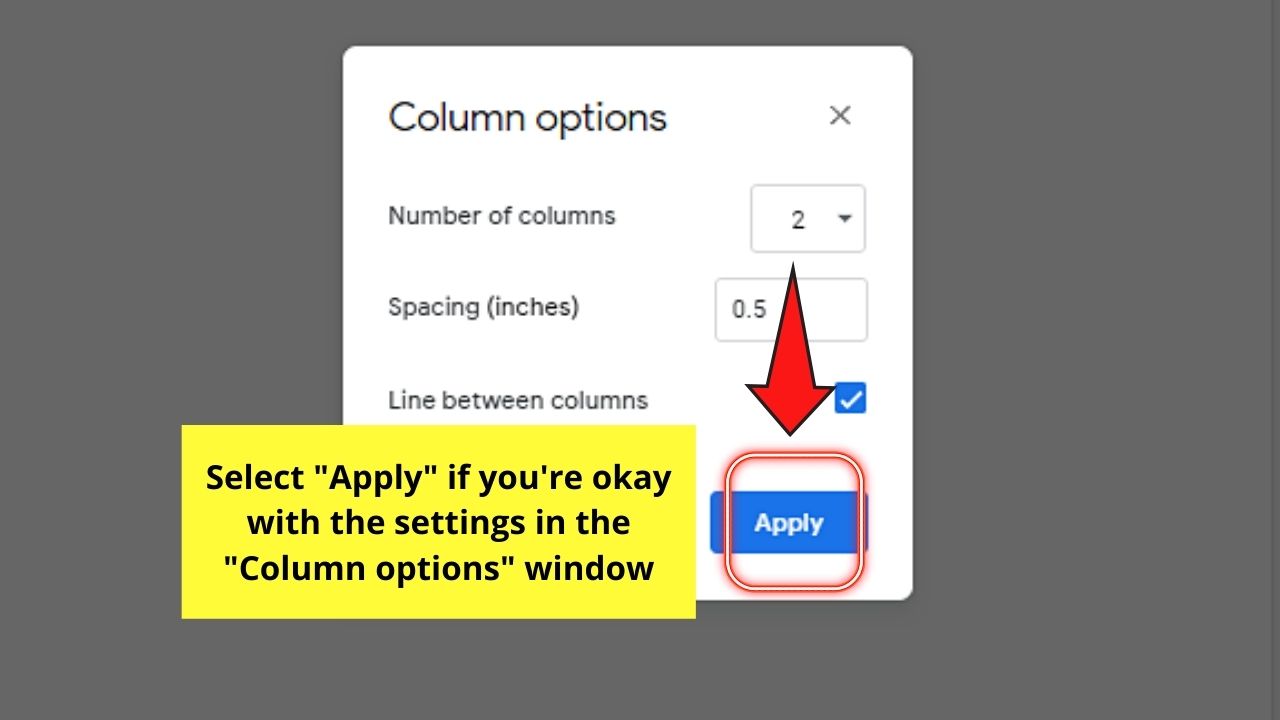 However, you’ll only see the vertical line after adding text to the document. 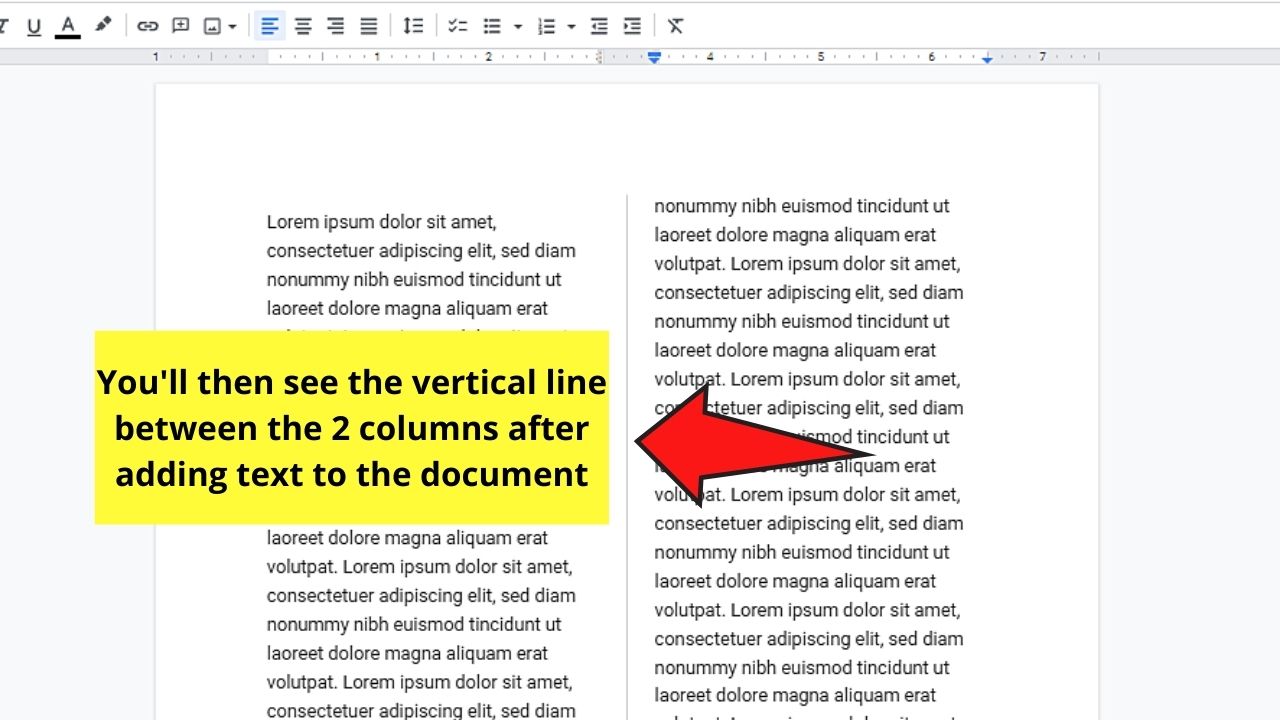 And, just like that, you’ve added a clean vertical line between the 2 columns, making you achieve the feat of a newspaper look.

This is how you make 2 columns on a blank Google Docs page.

How about if there’s already text in the document?

Making 2 Columns in Google Docs with Text in the Document

Step 1: First, highlight the paragraph you want to divide into 2 columns by dragging the cursor over them. 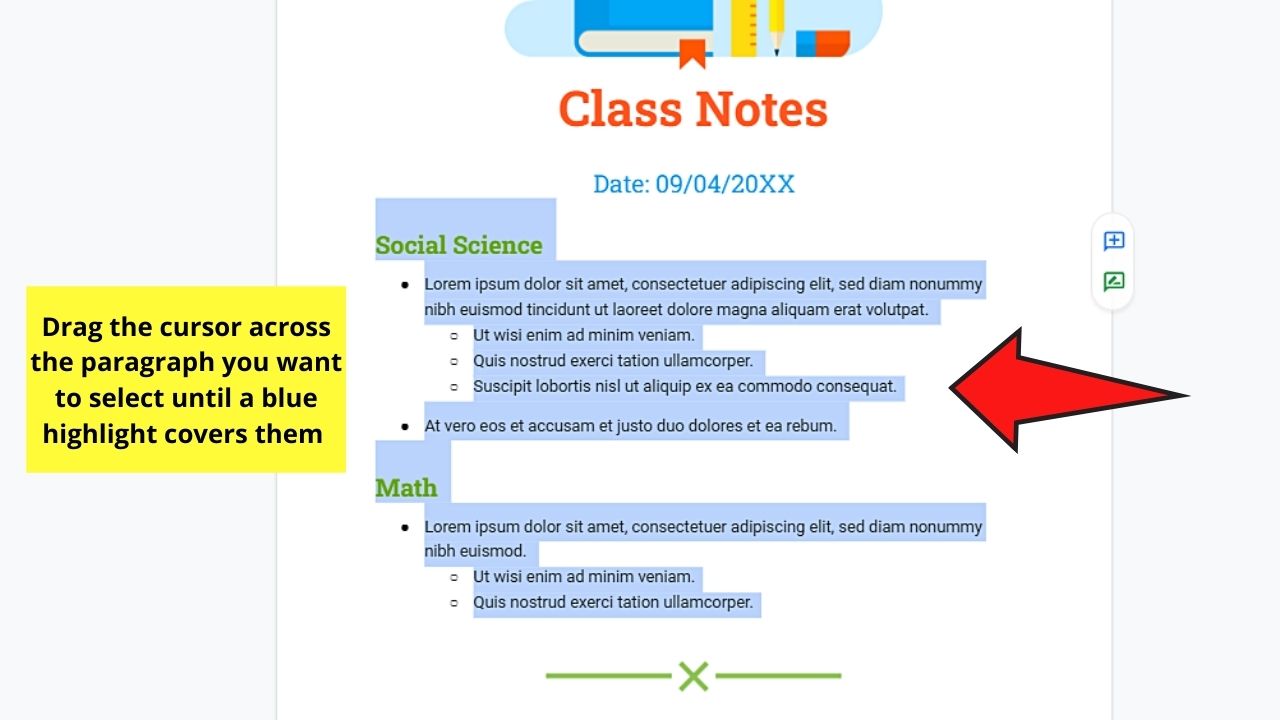 You’ll know you’ve selected the paragraph as it’ll be covered in a blue highlight.

Step 2: Go to the menu bar and select “Format.” 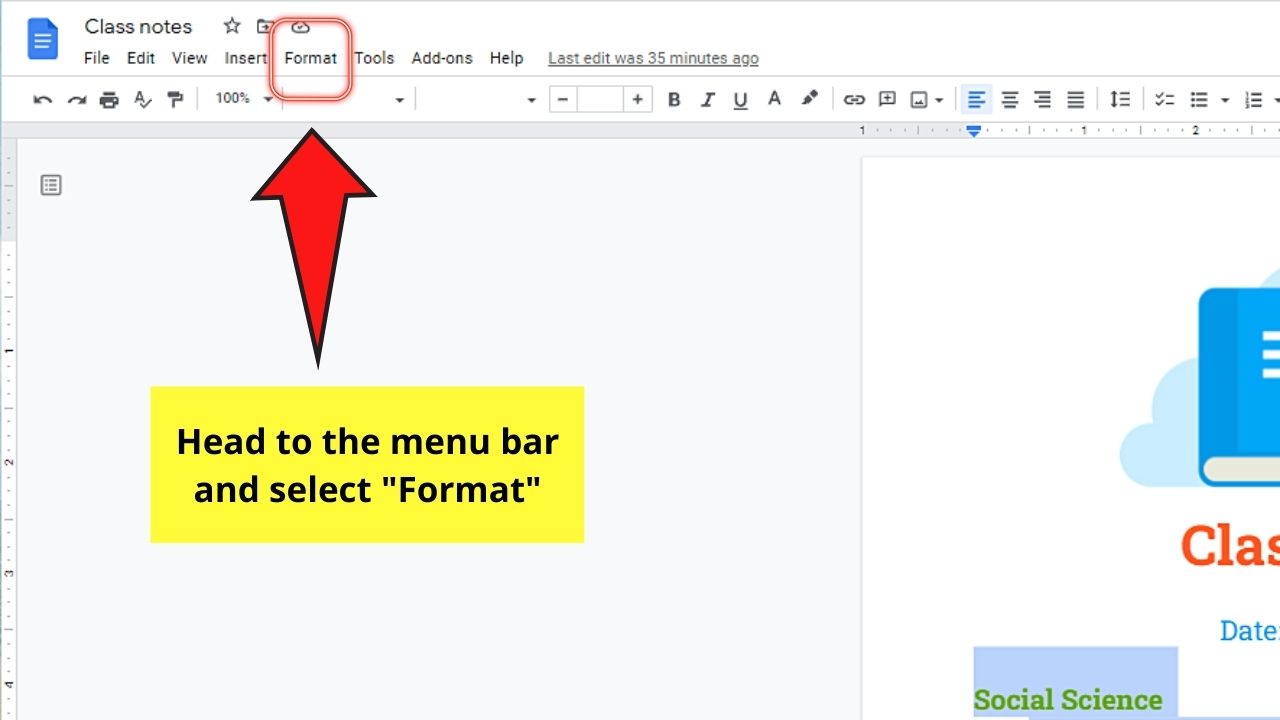 Step 3: Scroll down and hover your cursor over the “Columns” option. This move will then activate a secondary dropdown menu. 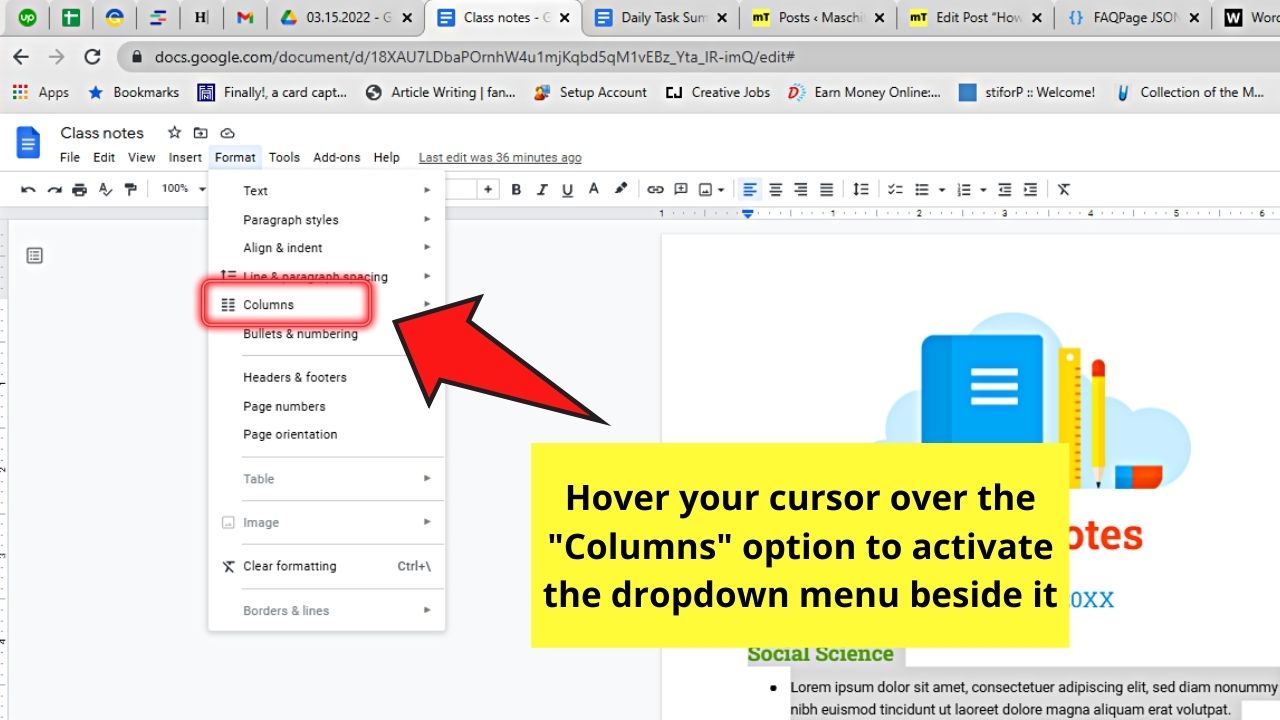 Step 4: In the second dropdown menu that appears, click the 2-column image. 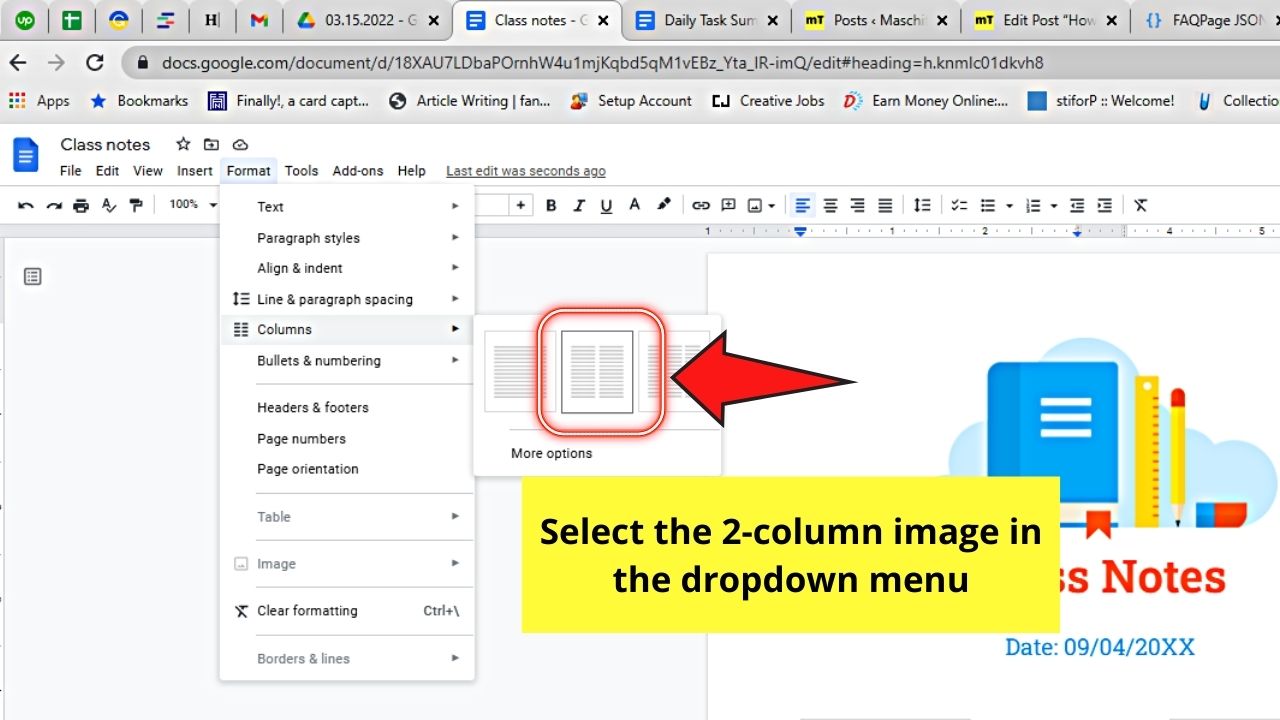 This will automatically divide the paragraph you highlighted into 2. 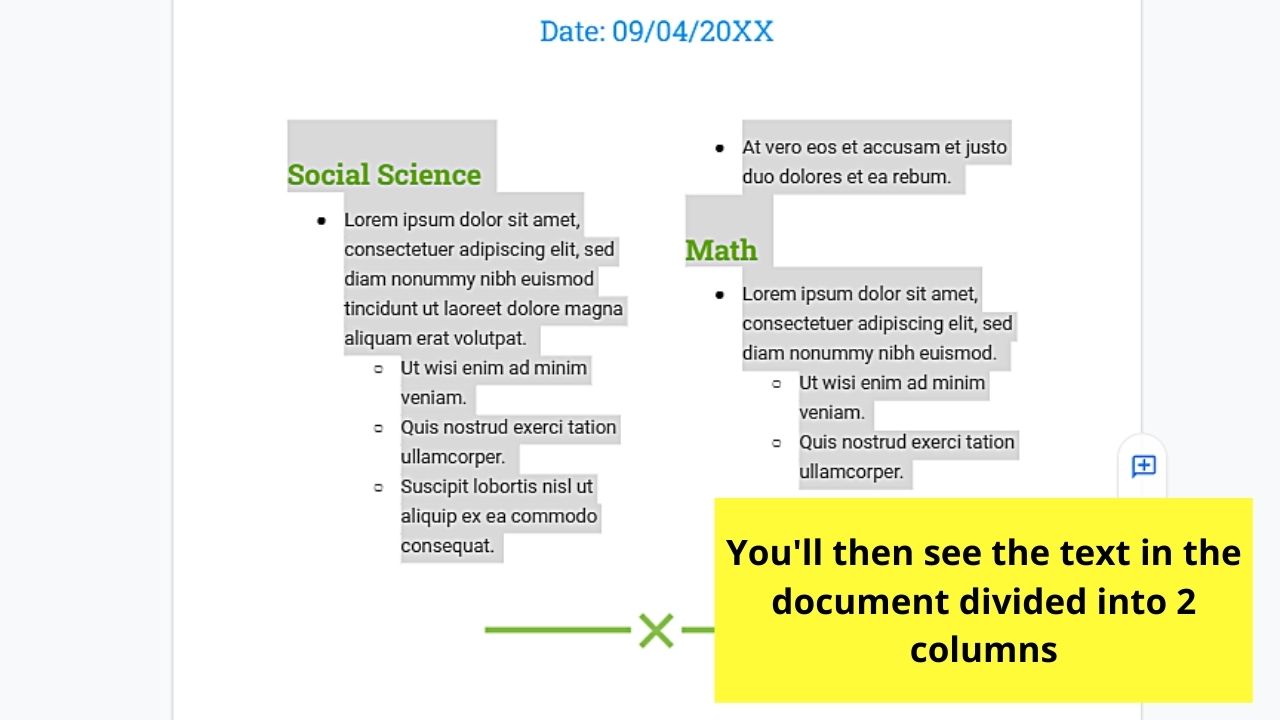 You can even do a drop cap in your Google Docs document to make it appear more newspaper-like.

So, are you now ready to format your report and turn it into a 2-column newspaper?

Is it possible to write on both columns in Google Docs at once?

By default, the second column you created in Google Docs only gets filled once space runs out in the first. But, if you want to type in both columns at once, add a column break from the “Format” menu. Then, right-click (Windows) or “Ctrl + click” (Mac) and select “Column break” in the pop-out window.

How do you revert or remove the two-column formatting in Google Docs?

To remove the 2-column formatting in Google Docs, highlight the paragraph first (if there’s text involved) before heading to “Format.” Then, select “Columns” and choose the 1-column image. This will then revert the text to a one-column page format.

Can you adjust the measurement of the spacing between your columns?

It is possible to adjust the spacing between columns in Google Docs. Head to “Format” in the menu bar, select “Columns” and click “More options in the second dropdown menu. Then, encode the spacing value in the “Spacing” section before choosing the “Apply” button.