Are you frantically trying to call someone only to be greeted with voicemail instantly?

Automatically reaching voicemail is a hint that your number has been blocked. It is not a certainty though.

Numerous settings on the device can reroute all calls to voicemail. Not just your number.

To know if it is only your number that is being automatically rerouted to voicemail, a little detective work can reveal a lot.

Discover the few steps to take that can reveal if your number is blocked.

How to know if someone has blocked your number

Did they really block my number?

It can be infuriating to think that someone blocked your number over something you may feel was petty.

Before jumping to conclusions, or sending angry text messages, consider the other possible reasons that result in calls hitting voicemail consistently.

Possible reasons for calls diverting straight to voicemail include: 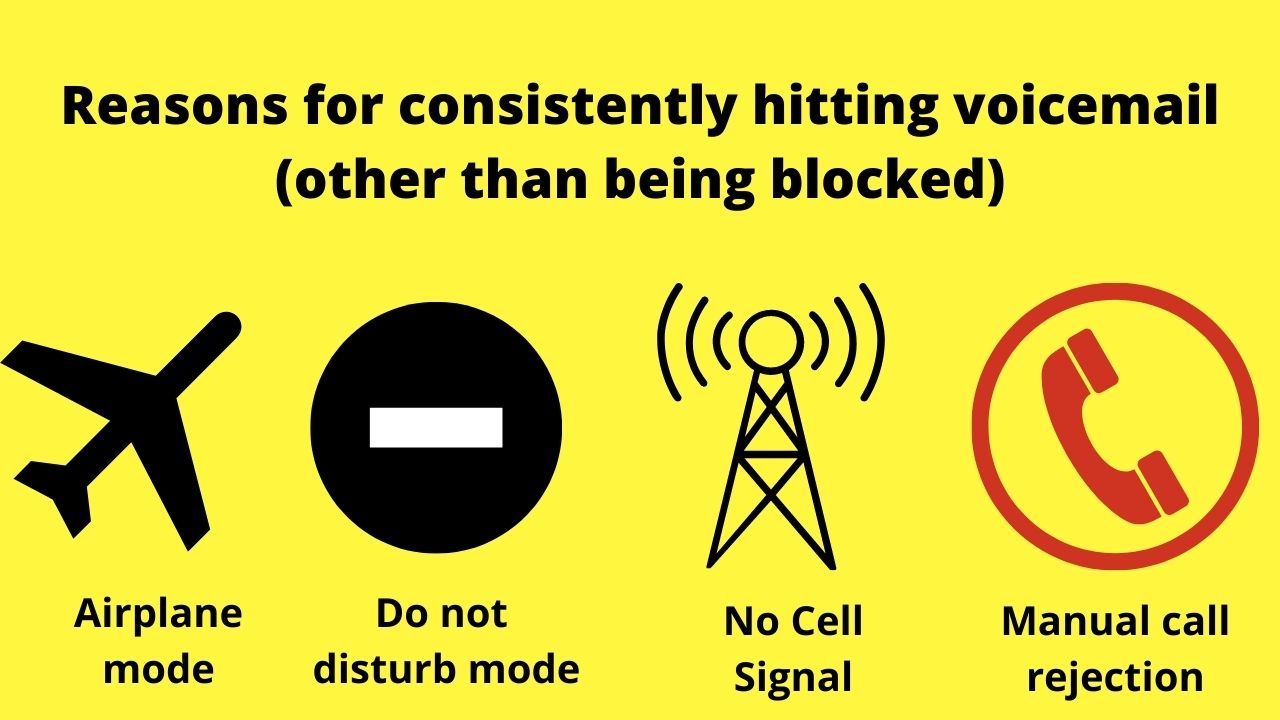 Depending on the device and the cell network, some carriers may have a different message for blocked callers. One that does not let you leave a voicemail.

Instead, the message may be along the lines of “the person you have called is unavailable” or a variation of that, without the option to leave a voicemail.

That could be a sign of a blocked number, but it can also mean the person’s voicemail is full, or not set up.

Whilst there is no setting on your device to know with certainty that someone has blocked your number, there are some subtle clues that your number may have been blocked.

Follow the steps below to get some helpful clues on whether you are blocked, or if someone is genuinely too busy to respond.

Method 1. Call the number to see how fast you hit voicemail

The call blocking process does not actually block the call. It only diverts it to voicemail. It happens near instantaneously and in the background.

The user is not aware of the call coming in and being blocked, and the caller remains oblivious to the fact they have had their number blocked.

The usual process for voicemail is for the call to ring a few times, then when it is clear that the user is busy, the call diverts to voicemail. This is usually after 4 or 5 rings.

When you call and hit voicemail automatically, or hear a half ring or full ring, then almost instantly hit voicemail, that can be the call blocking feature rerouting your call to voicemail.

Of course, it can also be that the person you are calling is actually busy and rejecting your call manually.

If the call rings twice, it is unlikely that your number has been blocked.

If you hear half a ring sound and then reach voicemail, or two to three beeps (like the engaged tone) before hitting voicemail, it is possible that your number has been blocked.

Method 2. Turn on delivery reports then send a text message (Works on Android and iPhones)

Finding out if someone blocked your number via the SMS delivery notification used to be limited to iPhone users. Android now has delivery reports too.

You need to turn it on before you send a text.

To turn on delivery reports on Android smartphones, follow these steps 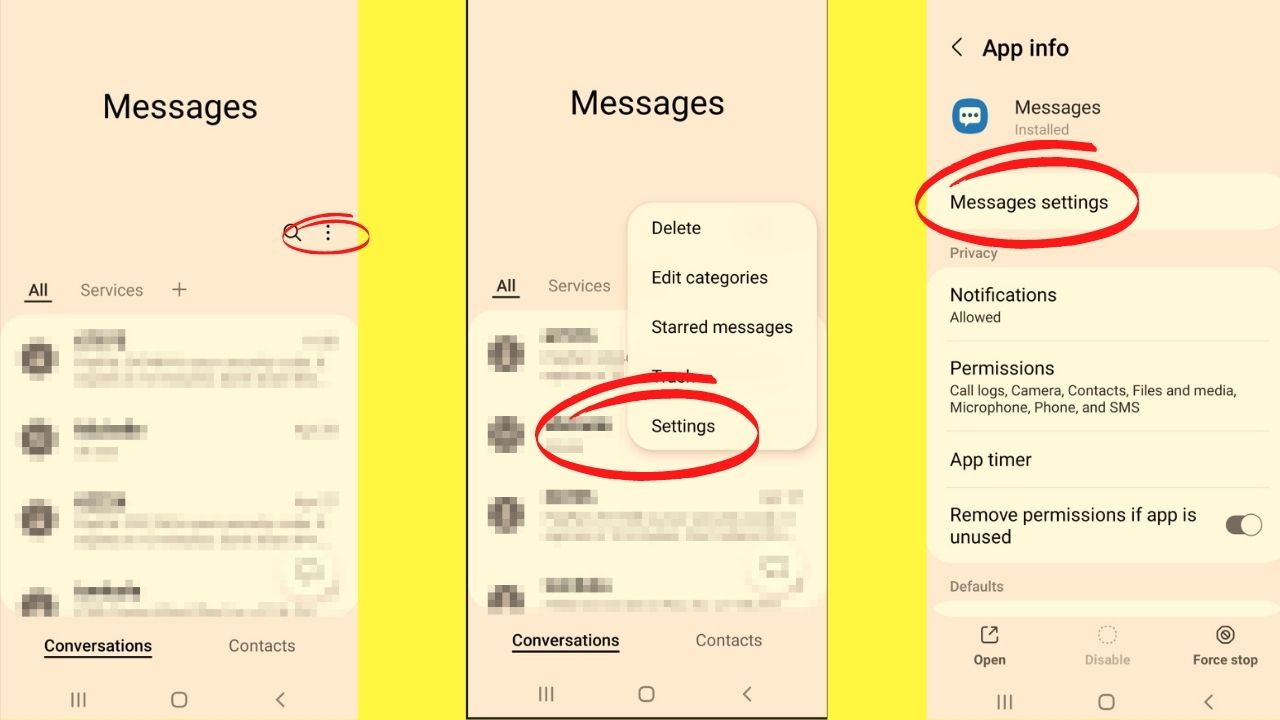 6. Toggle on “Show when delivered”

7. Go back, and do the same for “multimedia messages”.

In the multimedia message settings, toggle on “show when delivered, and “show when read” 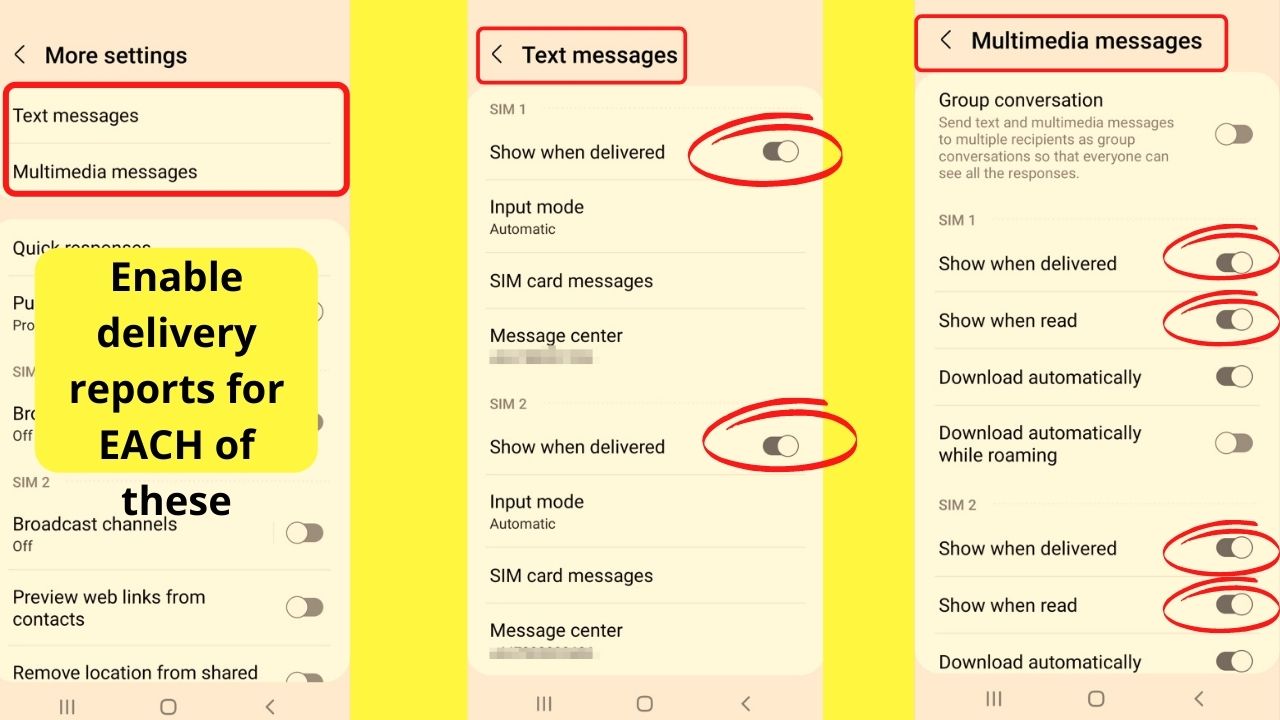 8. Send a message to the number you suspect has blocked you.

9. Once sent, long-press on the message, then select “view details”

At the bottom, it shows that a delivery report is “requested”. Only if your number is not blocked by the intended recipient will this change to “received” once it arrives in the messaging app.

If your delivery report shows that your message was “received” then your number is not blocked. 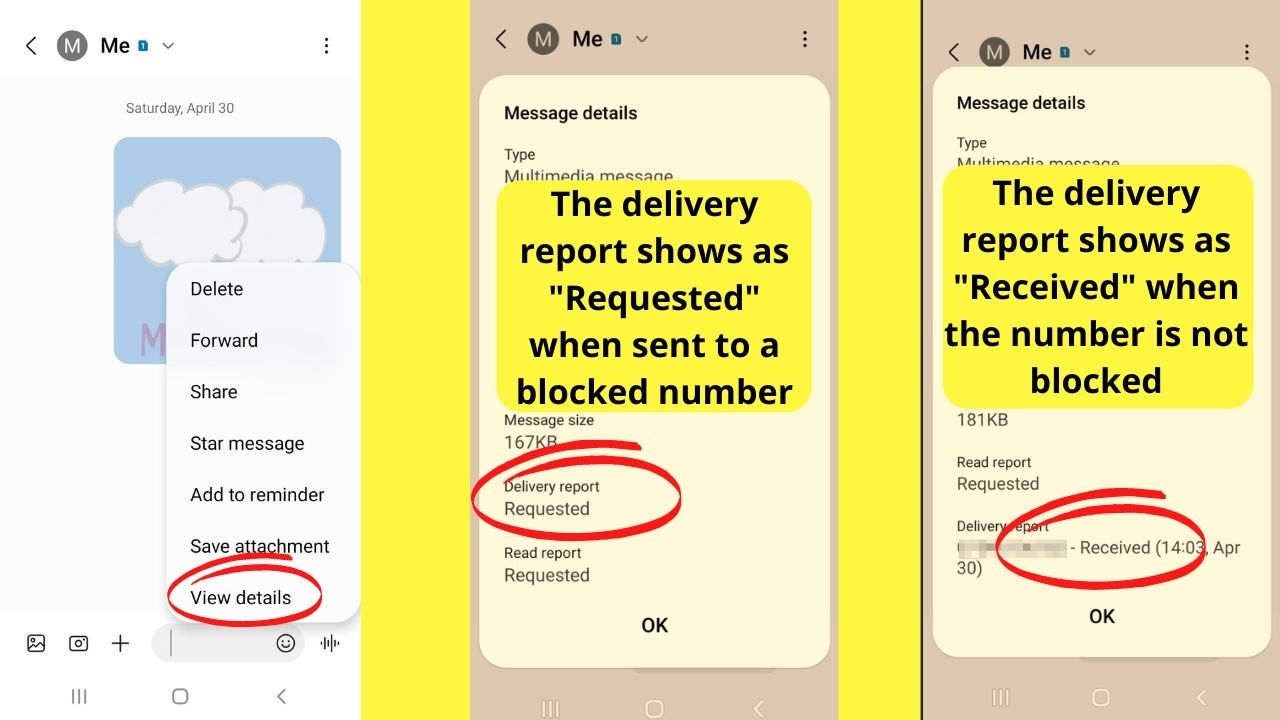 We blocked one sim to send a text to test this. The message did indeed go into the blocked messages folder and the delivery report remained showing “requested”.

Only once the number was unblocked did the delivery report later show the next MMS message as being “received”.

What the SMS (text) delivery reports on Android cannot do is give you a read report. MMS messaging can.

What do the delivery reports tell you?

Do blocked text messages still get sent on Android?

Yes. If your number has been blocked, the user will not see the message. Android sends text messages from blocked numbers to a different inbox. One that is not within easy reach.

The path to find blocked messages on Android is 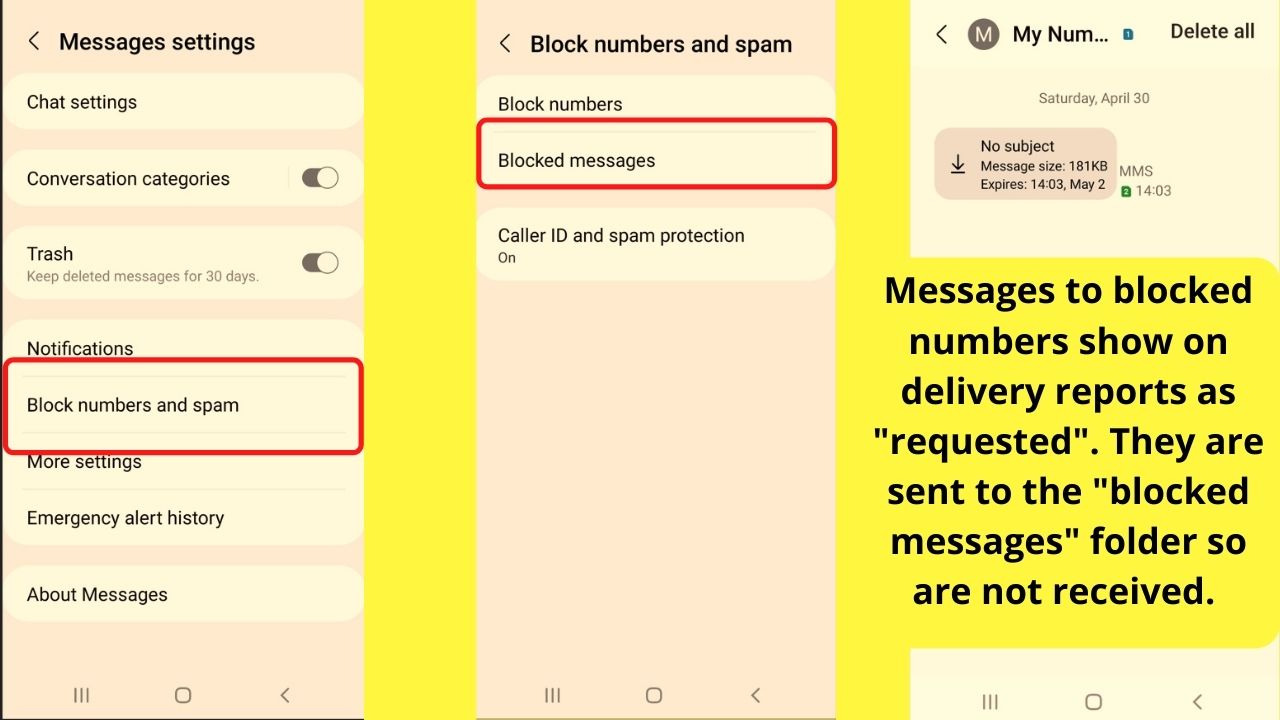 When you click into the “blocked messages” section, this is where all the messages sent from a blocked number go. They never reach your messaging app.

Or in the case that it is your number that is blocked, the person you send the text to has the text that you sent in that blocked messages folder.

Chances are, if you are blocked, the message will be delivered, but they are never going to see it.

Some phones may show the text as being received, despite being delivered to the blocked messages folder.

Therefore, like other methods, it is not a sure-fire way to know that your number has been blocked.

Method 3. Dial *67 then the number to hide your caller ID

Your phone number is nothing more than a unique identifier to you.

When someone blocks your number, the device registers your unique phone number as being prohibited.

The simplest way to bypass any call blocker is to withhold your number.

How to withhold your number? 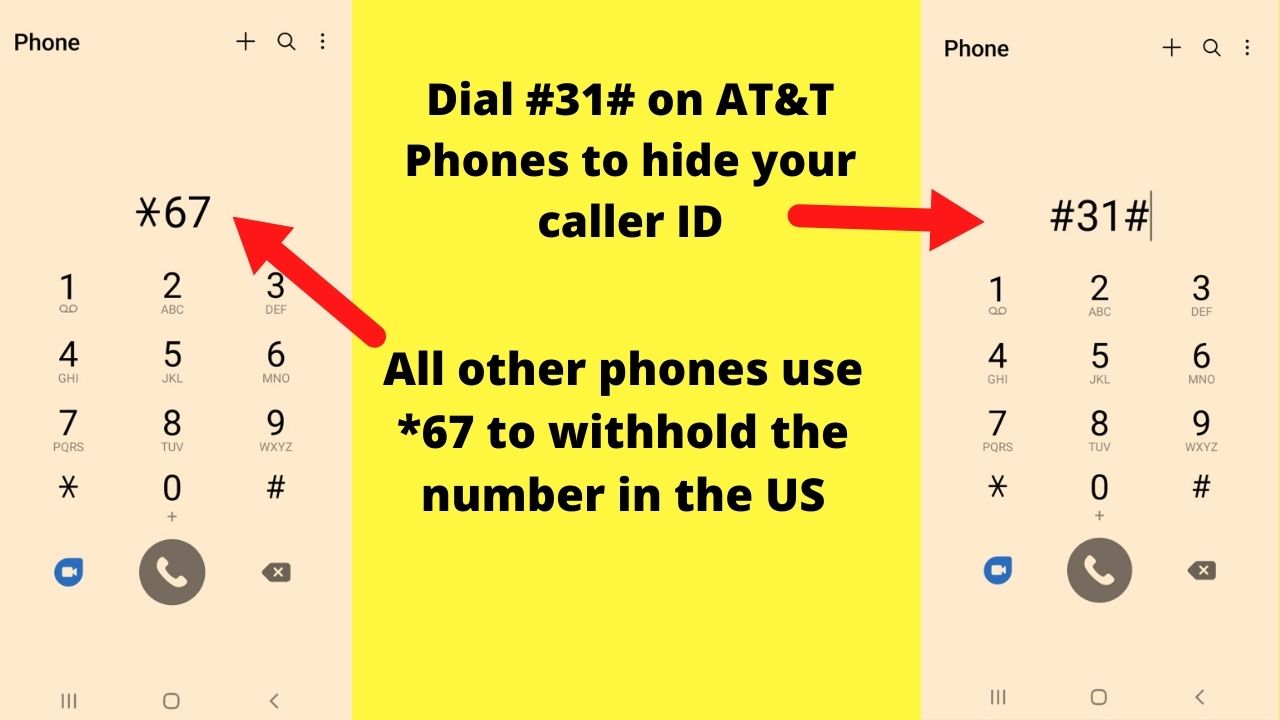 But, then again, it could also be that the person has no cell signal, has the phone in airplane mode, or has activated do not disturb mode.

When the device registers a call from a prohibited number, it automatically reroutes the call to voicemail.

There may be a brief interruption to the ring tone, but generally, the call diverting to voicemail happens fast.

When you bypass the call blocker by withholding your number, the ring tone should be normal.

The pitfall of withholding numbers is that it is all too easy for anyone to block all anonymous calls. The reason is to prevent nuisance calls from strangers from getting through. (mostly telemarketers and spammers).

If call blocking for withheld numbers, unknown numbers, or private numbers is enabled on the device, the call will be blocked. Even if your own number is not blocked.

For devices set to ignore anonymous callers, the only way to get around that setting is to use a different number.

Try with a friend’s phone, or if you would rather keep your detective work on the down low, try with a payphone, or install an app that gives you a second number.

Most offer free trial periods so enough to test if your phone number is blocked, or in the case of Google Voice, it is free for users on a personal Google account.

If you get through with another number or get at least two rings when your number hits voicemail after one ring, the logical conclusion is that your personal number has been blocked.

Should you call someone that you know has blocked your number?

When you know your number has been blocked, it is rarely acceptable to persist in calling. That can become or be considered to be harassment.

If you know that your number has been blocked, the only acceptable time to use a second number to bypass the call blocker feature is for emergencies.