If you’re not already familiar with what a Discord Music Bot is, what purpose it serves and the best Discord music bots out there, you’ve come to the right place.

Discord being a platform for gamers, also allows its users to listen to trending music while they play their favorite game with their friends. Now, how cool is that?

Imagine having the flexibility to control music on your Discord live stream or in a private party with your pals. Stick with us as we foray into the realm of 9 Top-of-the-line Discord Music Bots for you.

What are the best music bots for Discord?

The Rythm bot is amongst the most popularly employed music bots on Discord. According to Rythm itself, Rythm is actually the largest Discord music bot, with over 16 million active Discord servers. Rhythm is also at the top of the list when it comes to music moderation.

What makes it so popular though, is because of its cool, luxurious features which are otherwise reserved for premium users only on other discord bots.

! – The exclamation mark is the prefix/syntax used for giving commands to this music bot.

Let’s take a look at its best features.

All you need to do is type !play [songname] and it will search for the song/video on youtube. (By default, it selects the first song that most closely matches the name you’ve entered).

If you have a link for the youtube song you wish to play, you can simply type !play [url] and hit enter, this will automatically play the song with the link you provided.

To stop a song, you can type !stop.

To skip a song, use !skip

To disconnect the bot from the voice channel, type “!disconnect” or “!dc.”

This bot also allows you to play any song/playlist on Spotify and/or Soundcloud. Simply use the syntax !play [url] to play the respective song.

The Rythm dashboard now allows you to search and play a song right from your browser, without having to enter any command.

The Octave music bot has been around since the early days of Discord. (Yes, we’re talking about 2016 here). As older, more experienced in the industry, they regularly update their bot to ensure you, as their end-user get the best-possible lag-free and innovative music experience.

_ (underscore) is the prefix used for giving commands to the Octave bot.

Some of the features of this bot are as below.

Octave music bot also allows users to play songs on Soundcloud and Spotify. To play any Spotify/Soundcloud song or playlist, all you need the song’s link.

Use the aforementioned syntax for playing spotify/SoundCloud songs/playlists on Octave Music Bot.

Here’s a compilation of the basic Octave commands to make your experience better:

_pause – To pause a playing song

_disconnect – To disconnect the bot from the voice channel

Out of all the bots in this list, Hydra is the most diverse of them all. And not only that, this bot is also probably the easiest to use and control. It is a multilingual bot, supporting over 10+ languages. Let’s look at the syntax and other controls for this bot.

After you have successfully invited Hydra to your server, simply type .setup in any text channel and this will create a new “hydra-song-requests” text channel automatically (you can then move this channel anywhere).

To play a song on the Hydra bot, first:

Now let’s look at some of the features.

Hydra supports music on a lot of platforms, which includes youtube (a standard feature in every music bot), SoundCloud and Spotify. Simply paste the link of a song or a playlist into the hydra-song-requests text channel.

ProBot is another immensely popular and high-quality music bot. They also regularly update their bot to ensure you, the users, get the best possible lag-free and innovative music experience.

# – Is the prefix used for giving commands to this bot.

ProBot also allows users to play songs on Soundcloud and Spotify. To play any Spotify/Soundcloud song or playlist, copy and paste the song’s link.

Follow the aforementioned syntax for playing Spotify/SoundCloud songs/playlists on ProBot.

#pause – To pause a playing song

#stop – To disconnect the bot from the voice channel

ProBot is a multipurpose bot which implies that it is not only used for playing songs. This bot is also used for the purpose of server moderation, which also includes custom command creation and it is one of the top choices for moderating servers for numerous reasons.

Ranked number 5 on our list of the 9 best discord servers is the MEE6. Like ProBot, MEE6 is probably one of the, if not the most popular moderation/music bots used in various servers, be it for gaming servers such as Roblox Servers, or other servers for live streaming purposes.

! – Is the prefix used for giving commands to the MEE6 bot.

Although MEE6 is mainly used for moderation purposes, it is also used for playing songs and we have seen a lot of supporters in favor of this particular bot.

MEE6 is also a fan-favorite as far as custom ranks on a server go.

I personally use it for my custom ranks on my Discord Language Learning Server.

MEE6 can play songs from all popular music platforms such as Spotify, SoundCloud and Youtube. It’s music-playing commands are similar to that of the Rythm bot. Some of its commands are listed below for your kind perusal:

!pause – to pause a song

!dc or !disconnect – to disconnect the bot from the voice channel.

Other key features for this bot include easy creation of custom commands through the MEE6 dashboard, setting up a welcome message and Auto-roles for your server, Levelling, and XP system.

Protection of your server from ads, links, swearing, excessive emojis, and much more thanks to the easy-to-use moderation system.

You can also set up announcement plugins for example, when someone goes live or whenever they upload on Youtube or any other streaming platform, MEE6 will send a notification to your predetermined channel.

Coming up next on our list is Maki bot. This is also another bot which is used for playing music on servers while you are doing your favorite thing. Before any further ado, let’s dive into its features which are mentioned below.

The default syntax for Maki bot is “.”.

Other features of this bot are:

This particular feature is enabled only for prime users on some other discord music bots but not on Maki bot. This bot actually provides the option to define a custom syntax in order to issue commands to the bot.

While some commands are reserved for premium users, here are some of the widely available commands that are available to users for free.

.connect – Summons the bot to the voice channel you’re in.

.stop – Used to stop the songs playing and disconnect it from the voice channel.

Maki bot, like some other bots mentioned above also allows users to play any song on Youtube and Soundcloud but unfortunately doesn’t support Spotify music.

We do, however, hope that this functionality will soon be added so hold your horses till then or switch to other bots if Spotify is a must for you.

The chip music bot is similar to most other music bots mentioned above, allowing users to play songs from Youtube, Vimeo, SoundCloud, Twitch, Spotify, Mixer and Bandcamp.

The syntax of the Chip music bot is ch!

Talking about the bot’s features, you can do the following;

ch!seek – seek to a specific time stamp in a song.

ch!disconnect – disconnect the bot from the voice channel

And many more such commands.

You can control the bot audio, enable bass boost, equalizer, treble boost and vocal boost. All these features appeal to audiences who want such options where they can manually adjust music settings.

Despite a decline in the popularity of radio channels, some radio programs and podcasts have kept the spirit of Radio alive. The Chip bot includes 180 radio stations from around the world for you to tune in and listen to. How’s that for a change?

Fredboat is an easy to use, free yet high-quality music bot. It does not require any setup or configuration, simply invite the bot to your server and start listening to your favorite music in a few minutes.

To use the Fredboat music bot, simply write ;; in front of every Fredboat Music bot command.

Without wasting any time, let’s talk about FredBoat’s features.

The supported streaming platforms on FredBoat are as follows;

Unfortunately for now, only premium users have access to the Spotify feature where you can search and listen to songs on spotify. Vimeo and Mixer are other popular platforms that can be utilized in the absence of  Spotify.

Instead of using links to play the songs on Youtube and Soundcloud, simply type the name of the song along with the syntax and let FredBoat search for the song on Youtube/SoundCloud.

The bot has a whole range of commands that we believed are best summarized through a screenshot directly from the source: 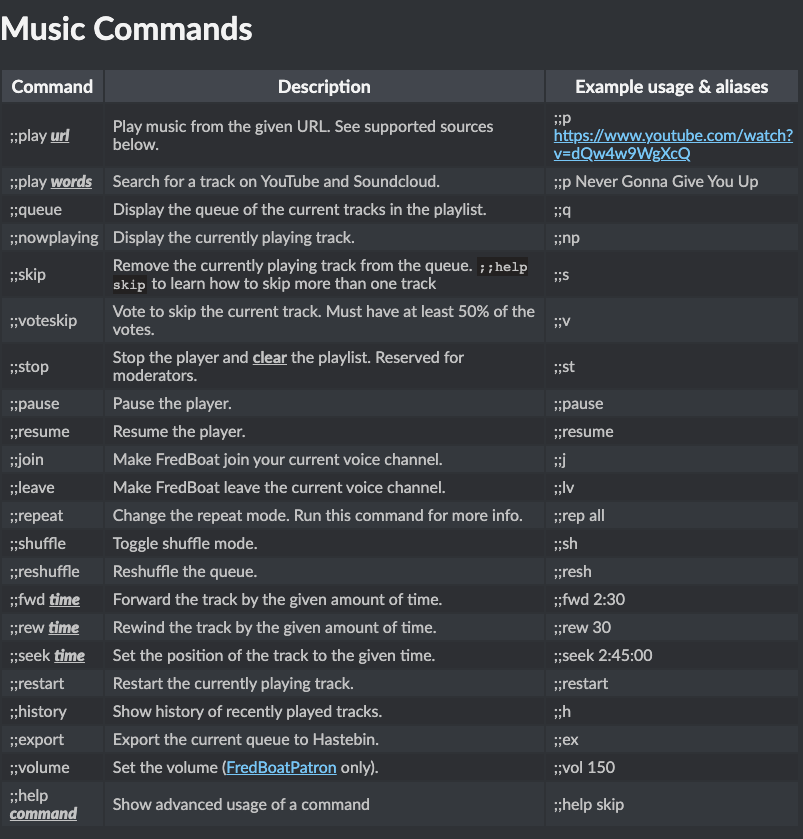 The last bot on our list is Groovy, and yet it is in our Top 2 most recommended bots. WHY? Because it’s easy to use, you can listen to songs, as well as search the lyrics for that song through the bot so you can sing along better, saving yourself from the embarrassment of forgetting the lyrics to your favorite song.

What is the syntax of the Groovy bot?

Talking about the basic commands for playing music, they are provided in the picture down below.

One of the best for a reason. That reason being, Groovy Bot supports music streaming from various platforms, such as Youtube, SoundCloud, Spotify, Mixer, Vimeo, Twitch, etc.

Yes, Groovy also has the Youtube/SoundCloud search feature, as most of the bots we have mentioned in our list.

So that’s it, folks!! This is our list with the best 9 Discord Music Bots!

Don’t forget to share this with your buddies if you found this a good read. If you have any queries or concerns just comment down below and I’ll get back to you.

[…] P.S. Though it’s not primarily known for this function, the Dank Memer bot can also be used to play music. Check out some of our preferred music bots here. […]

The 9 Best Discord Moderation Bots You Wish You Knew Earlier

[…] ProBot is not solely a moderation bot, you can also use it as a music bot for example. This bot is also heavily used for server moderation, which also includes custom […]