Hey! I’m still watching a video on my Android device, but the screen begins to dim.

Though I can swipe down and adjust the brightness slider to brighten the screen, I don’t want to repeatedly do it.

Is there any way I can stop my Android screen from dimming?

Well, lucky you, as there are 4 known and very easy ways on how you can stop your Android screen from dimming on its own.

How to Stop Your Android Screen from Dimming

One way to stop your Android screen from dimming is to turn the “Auto-brightness” off. Another way is to set a different screen timeout time in the “Settings” app. Third, deactivate the “Power Saving Mode” in the notifications panel. Lastly, you can turn the “Double tap to turn on screen” option on.

Stopping My Android Screen from Dimming — 4 Ways To Achieve It

For the most part, screen dimming helps in saving the phone’s battery life as it uses less energy.

Also, when your Android device dims, it helps to shield your eyes from the damage caused by staring at a brightly-lit screen.

Yet, there are times when this automatic screen-dimming feature can be a nuisance, especially if you’re watching a movie.

But, as there are 4 different reasons behind your Android screen dimming, you need to know which among the four is causing this issue.

So, without further ado, let’s learn the basics of stopping your Android screen from dimming depending on the cause.

Auto-Brightness Feature is Turned On

Aka the “Adaptive brightness” feature, auto-brightness simply means that your Android device will automatically adjust the brightness levels with the environment you’re in.

If you’re in a brightly-lit room, the phone will dim; if the room’s dark, the screen will brighten up.

While this auto-brightness feature helps in saving not only your phone’s battery but your eyesight as well, it can be quite a nuisance.

Thus, to inactivate the auto-brightness feature, do these steps:

Step 1: Tap the “Settings” app on your Android device. 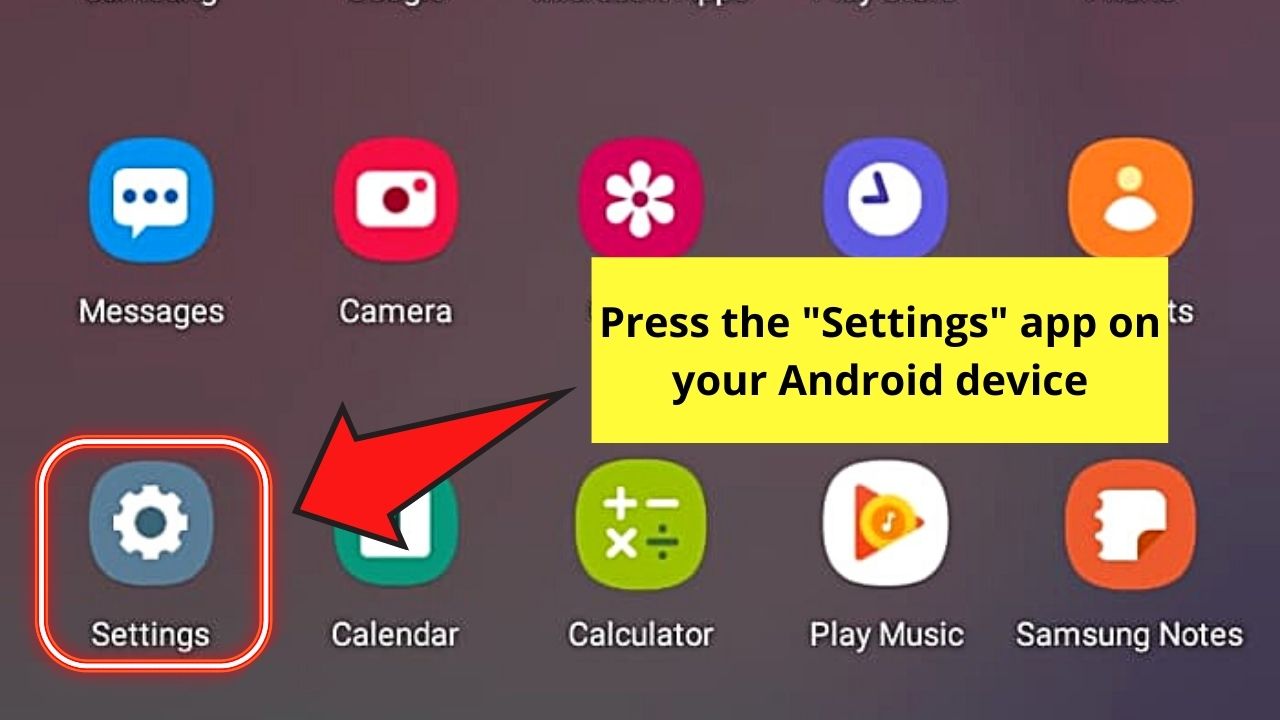 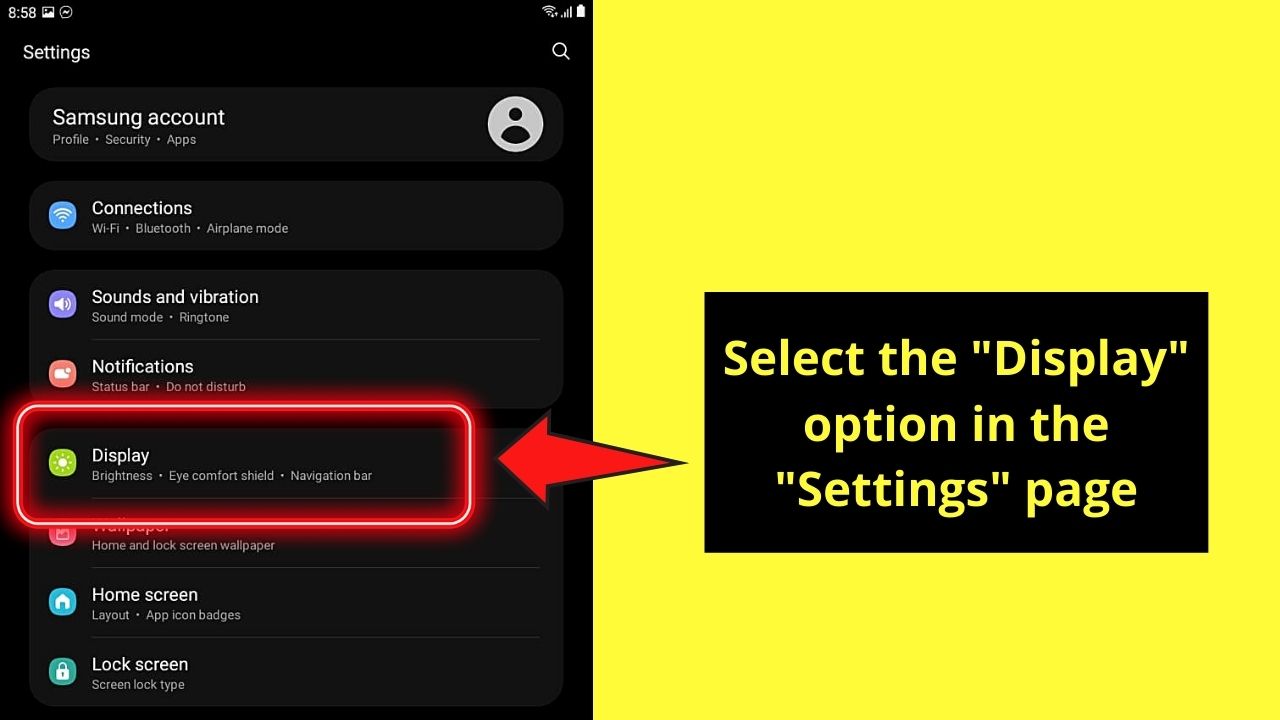 Step 3: Once you’re on the “Display” page, turn off the auto-brightness feature by tapping the “Auto-brightness” toggle once.

You’ll then see a “Brightness” slider appear above the “Auto-brightness” toggle. 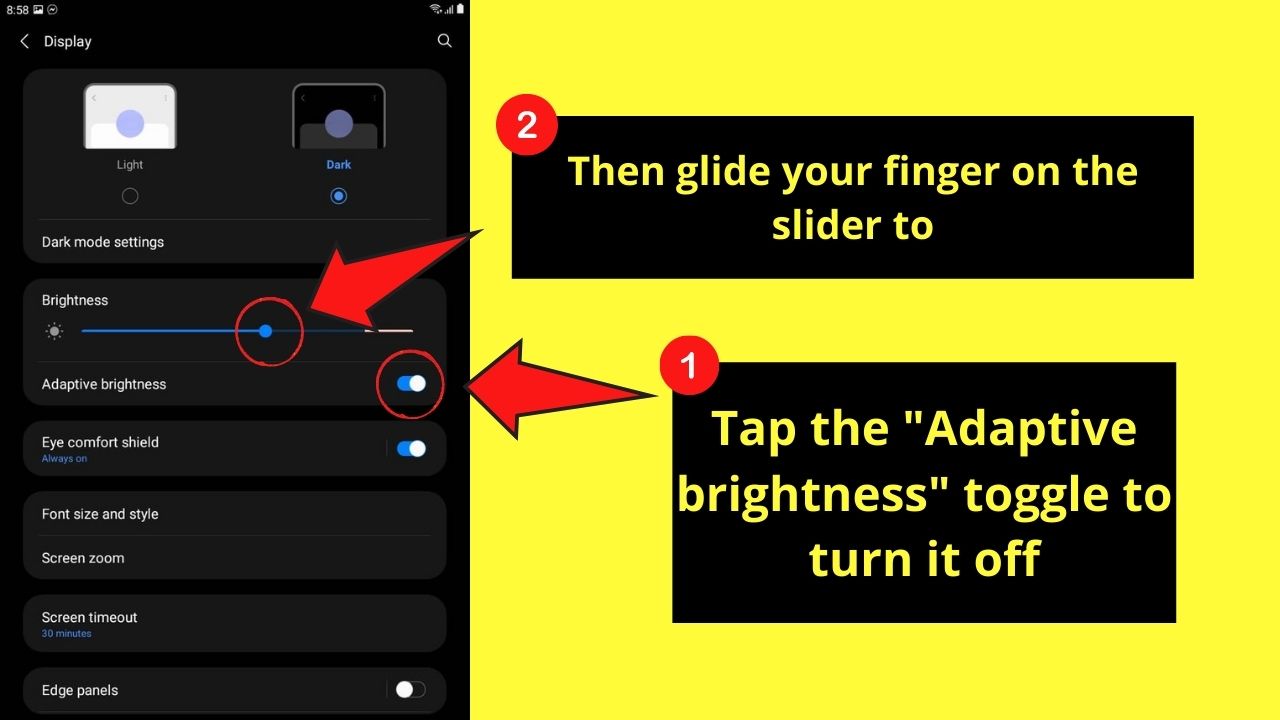 Step 4: Now, you can increase the brightness level manually by gliding your finger across the slider.

You can also access this “Brightness” slider from the notifications panel after swiping down your finger on the screen. 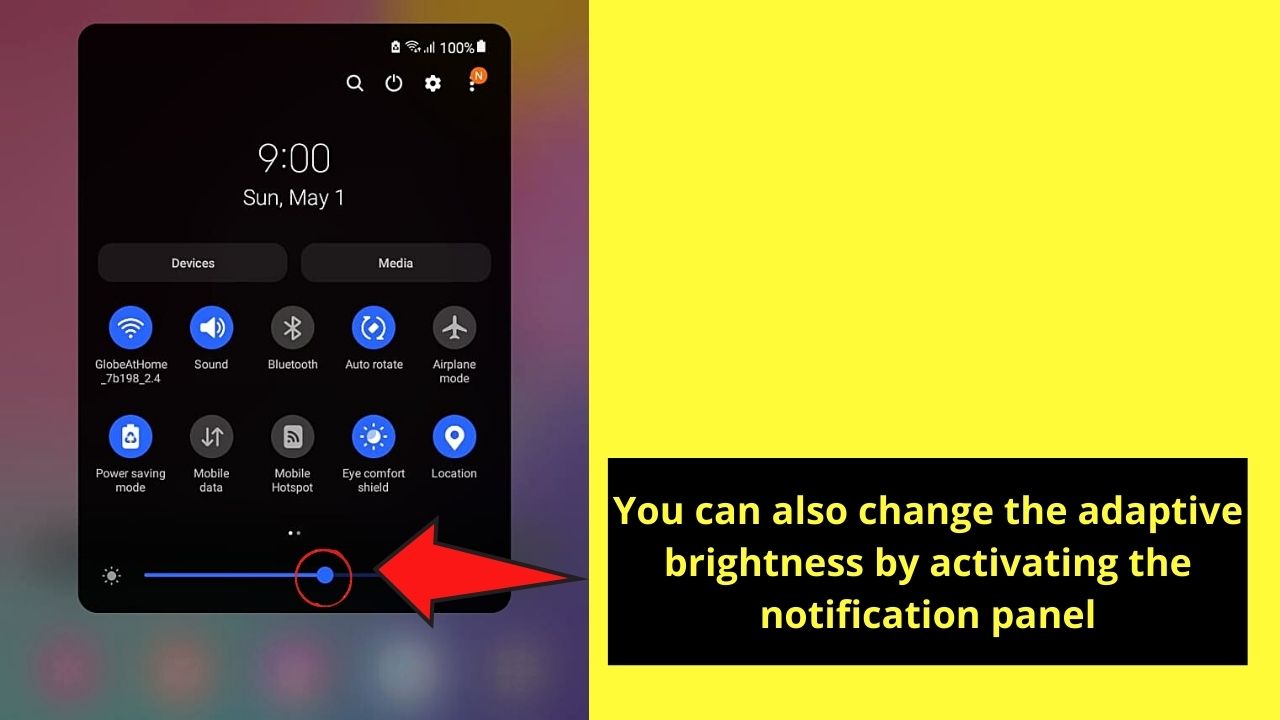 Now, if turning the “Adaptive brightness” off isn’t the solution you’re looking for, try to see if the second one below can help.

Whenever your Android device’s unattended for extended periods, the screen turns off automatically.

When that happens, your phone’s in idle mode.

Now, if you want to stop your Android screen from dimming due to your device’s inactivity, apply the following steps:

Step 1: Launch the “Settings” app on your device by tapping on it. 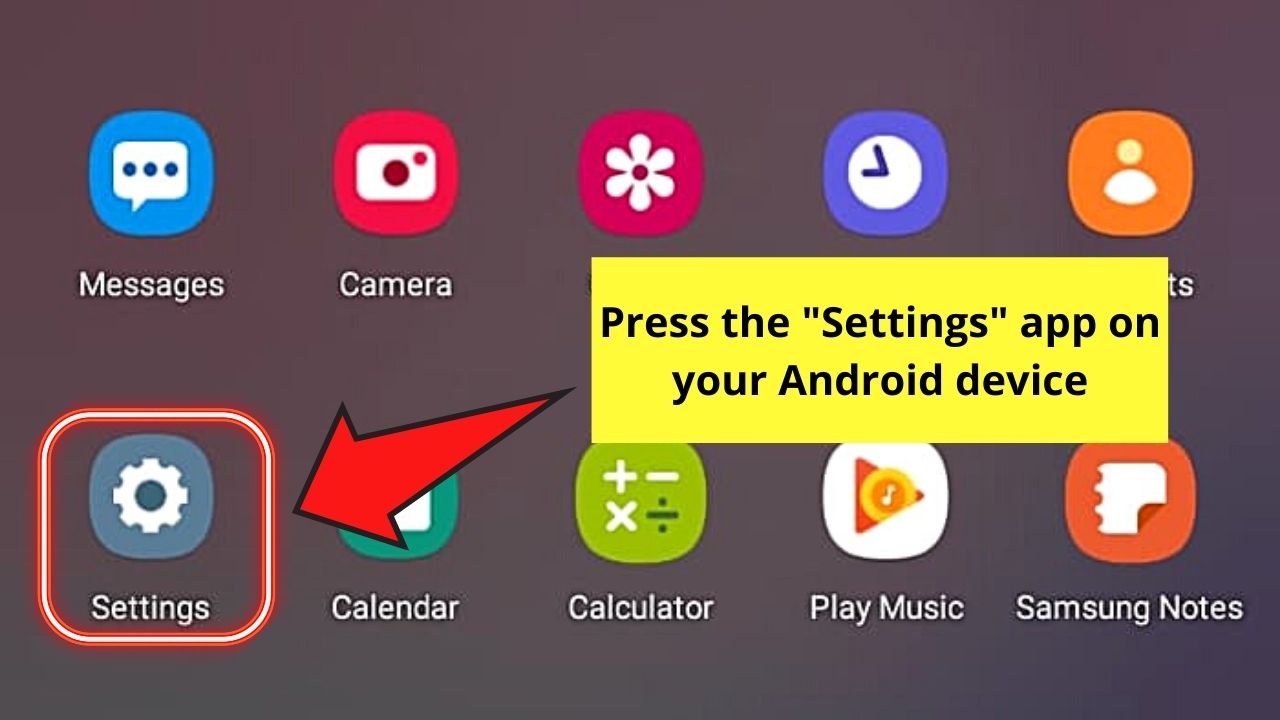 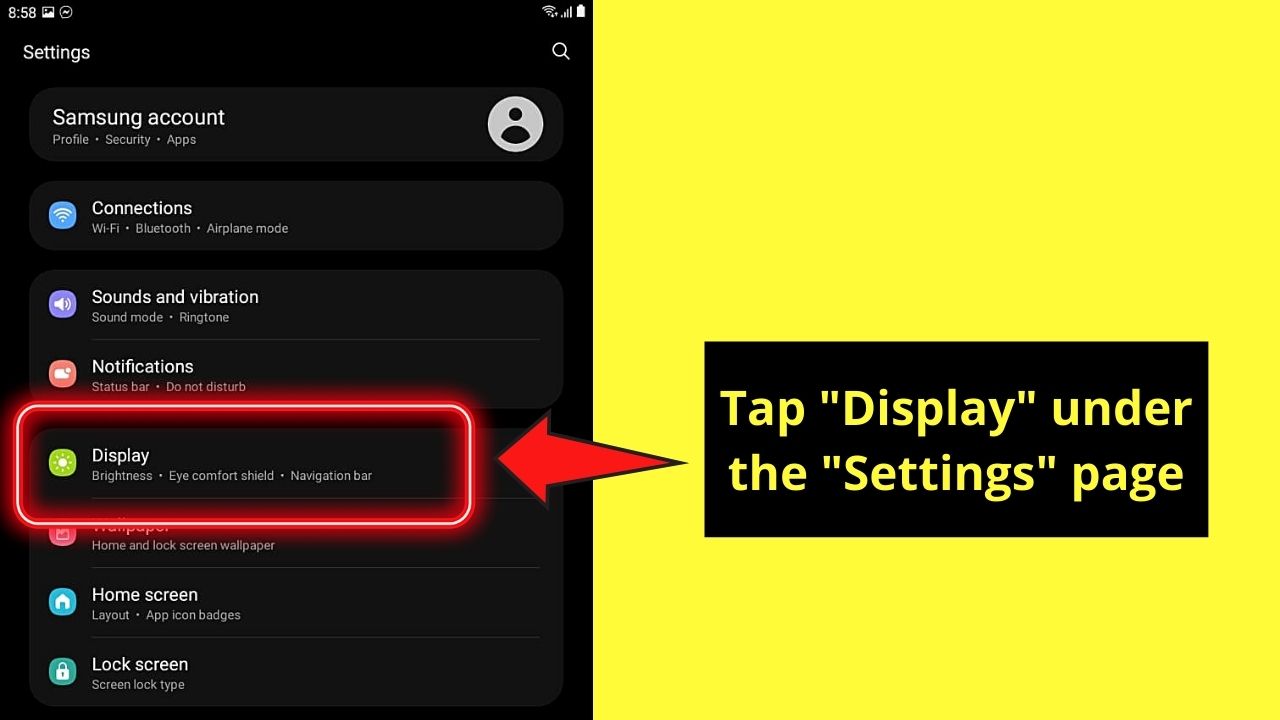 Step 3: On the “Display” page, tap the “Screen timeout” option. 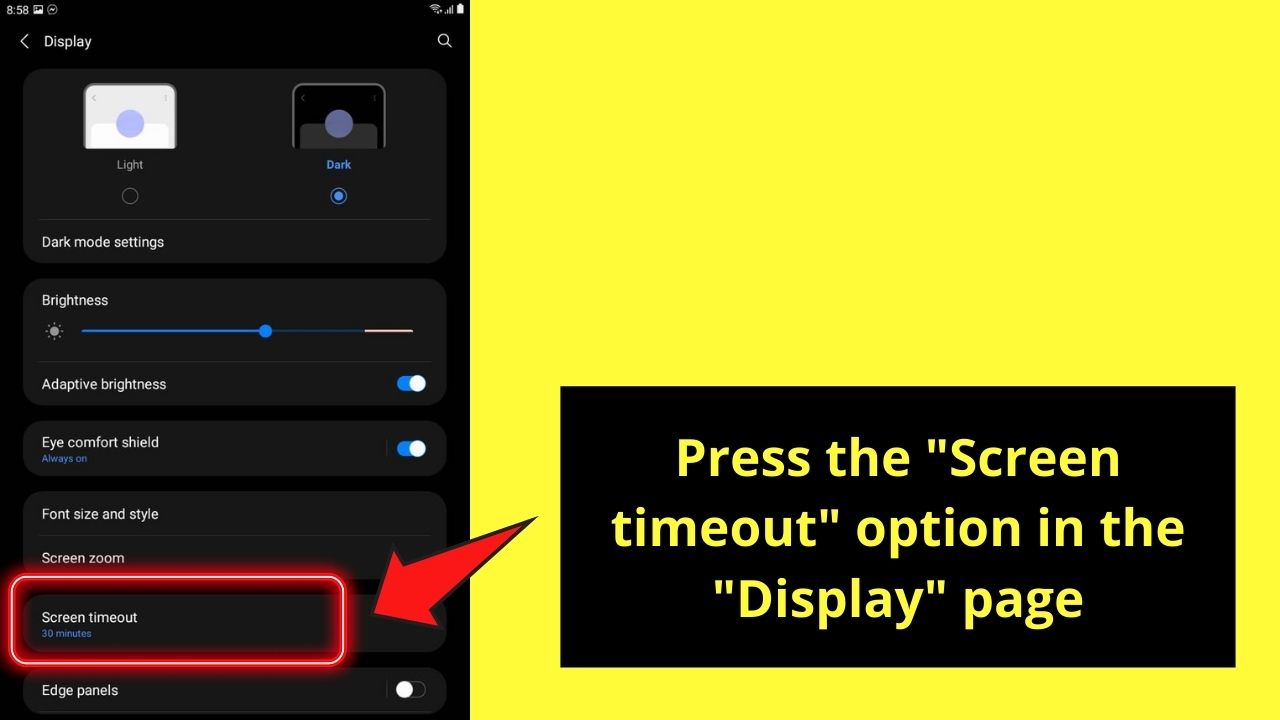 Step 4: You will then see various options on the number of seconds or minutes that will need to pass without any activity before the screen turns off.

All you need to do is tap on the duration you prefer before your screen automatically dims. 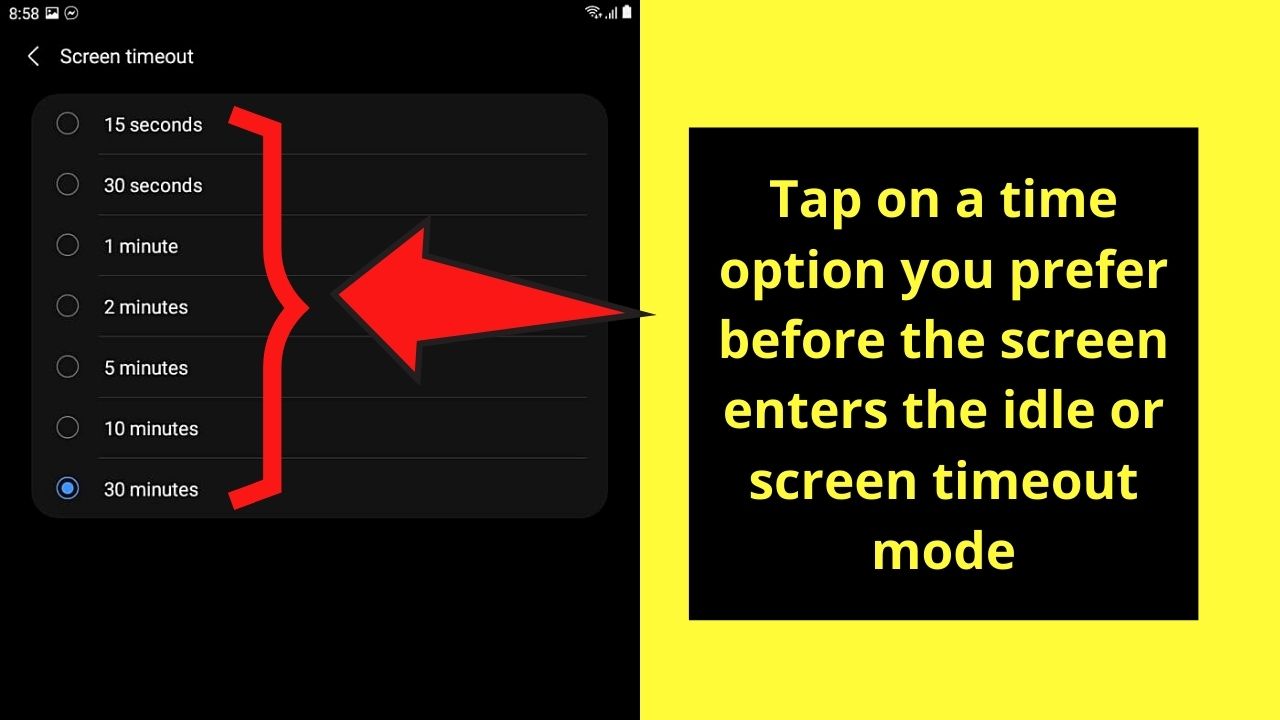 After choosing the duration, the changes will automatically be applied; you only need to exit from the “Display” page.

Most of the time, this method is the key to stopping your Android screen from dimming. But, if it isn’t check the third reason below.

Phone is in Power Saver Mode

When your Android device’s in power saver mode, the phone’s taking control over its brightness level, dimming, or switching off the screen as needed.

This feature ultimately is a life-saver when the phone’s battery is drained. But, if not, the power-saving mode can be quite a nuisance indeed.

So, if you want to stop your Android screen from dimming because of the power-saving mode, make sure to read through the steps below.

Step 1: Swipe your finger down on your Android device’s screen. This move will automatically bring down the “Notification” tray or panel. 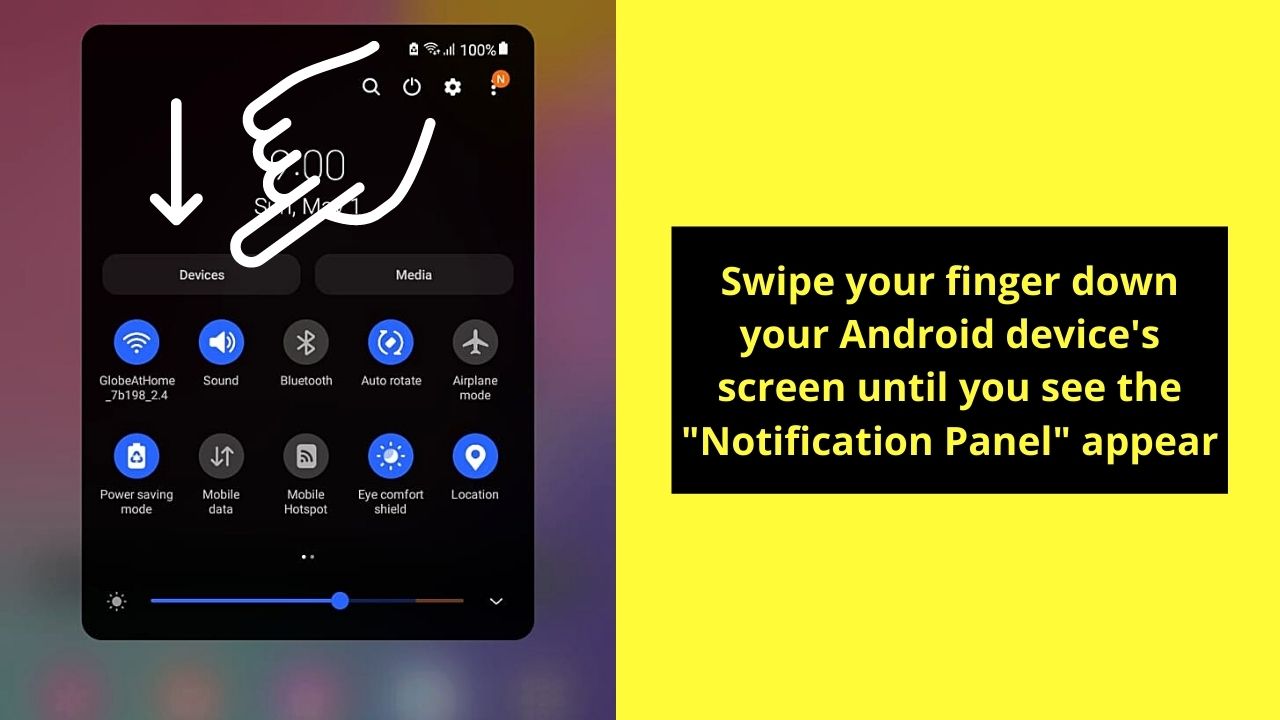 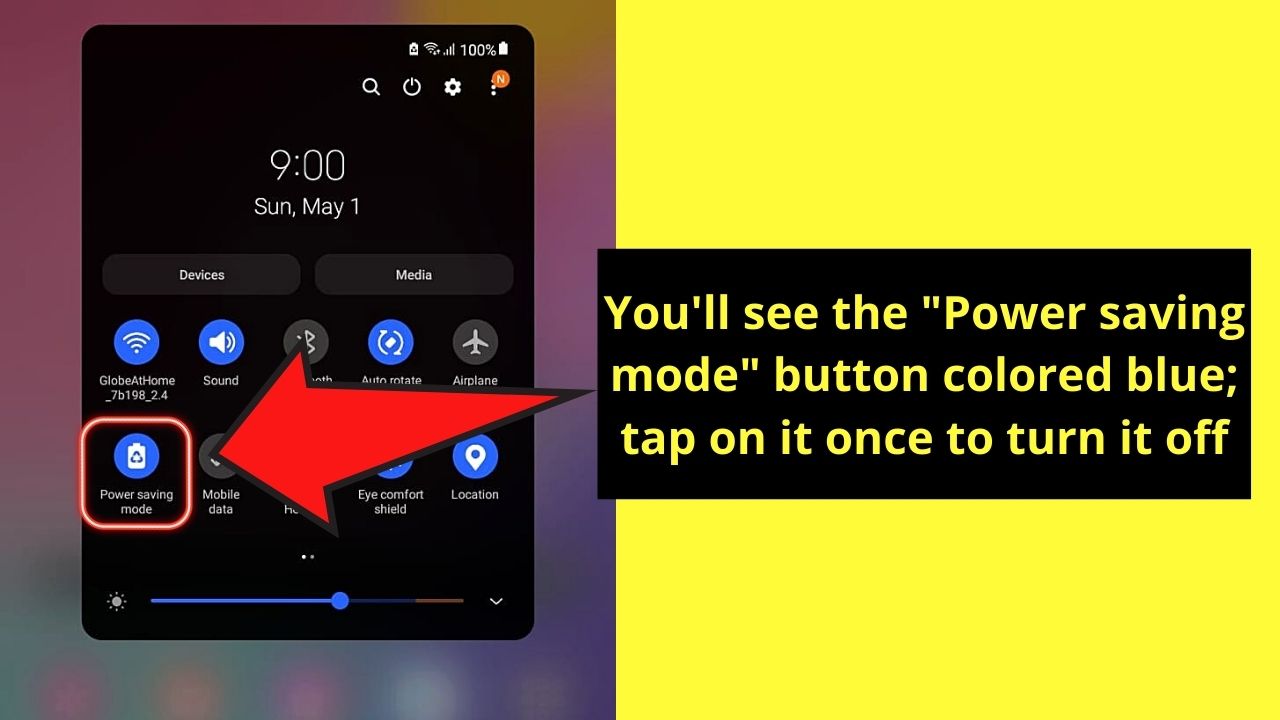 To switch it off, simply press once on the said button until it turns grey.

Usually, turning the power saver mode off solves the problem. But, if you still find your Android device screen dimming, you might want to take a look at its proximity sensor.

Ever wonder why your phone suddenly dims when you answer a call?

Your Android device’s doing such because of the proximity sensor that activates whenever an object closes in on the screen to prevent incidental button presses.

Automatically, the screen will dim whenever it senses an object near the said sensor, including your ear and face.

You’ll find this proximity sensor at the top part of the device.

Hence, if you want to stop your phone from dimming automatically, check whether an object or dirt is blocking the proximity sensor.

If such isn’t the case, you can just press the device’s power button to turn on the screen.

But, if you don’t want to constantly press your Android device’s power button, then the double-tapping feature can help.

To activate this nifty feature, do the following:

Step 1: Tap on the “Settings” app to launch it. 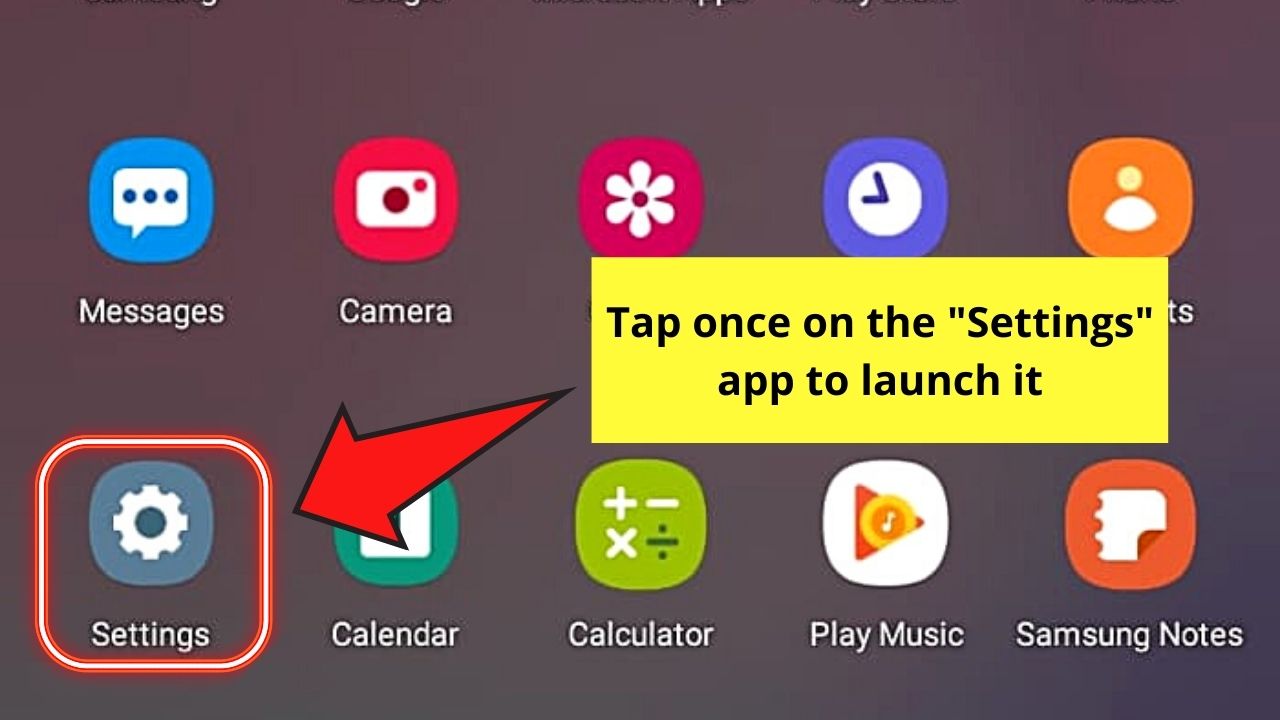 Step 2: Select the “Advanced Features” option on the “Settings” page. 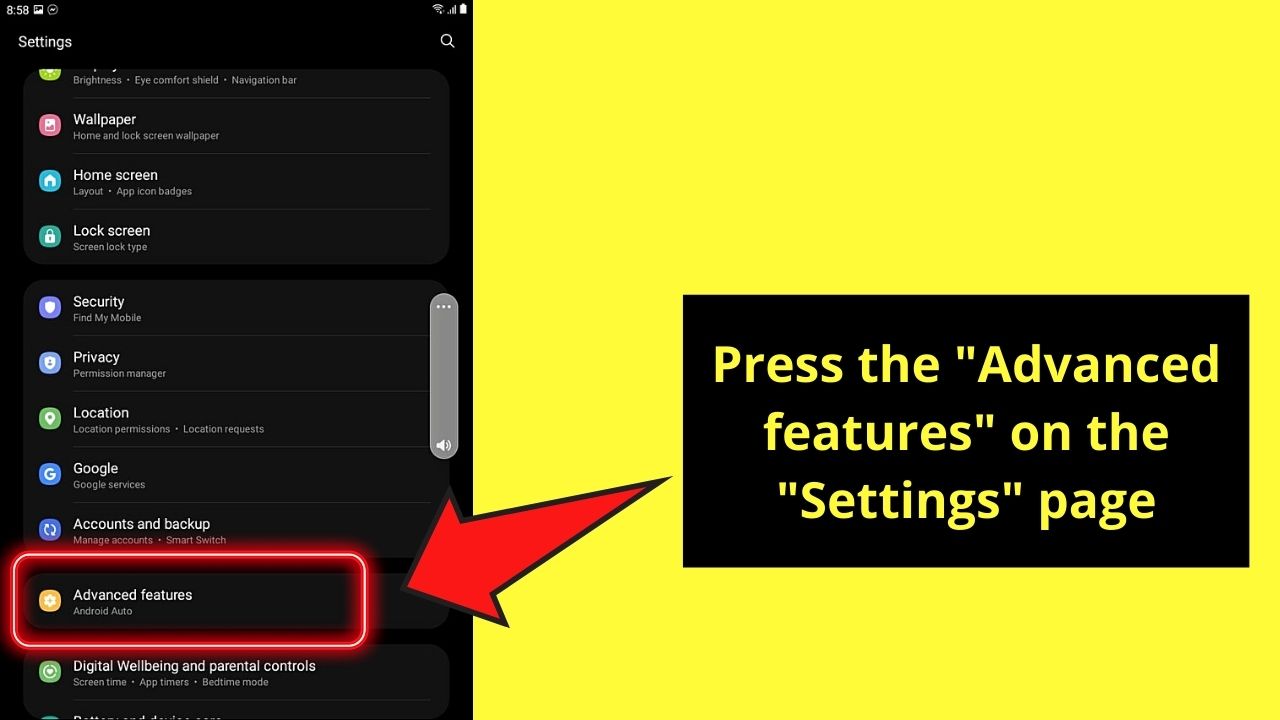 Step 3: Under “Advanced Features,” press the “Motions and Gestures” option. 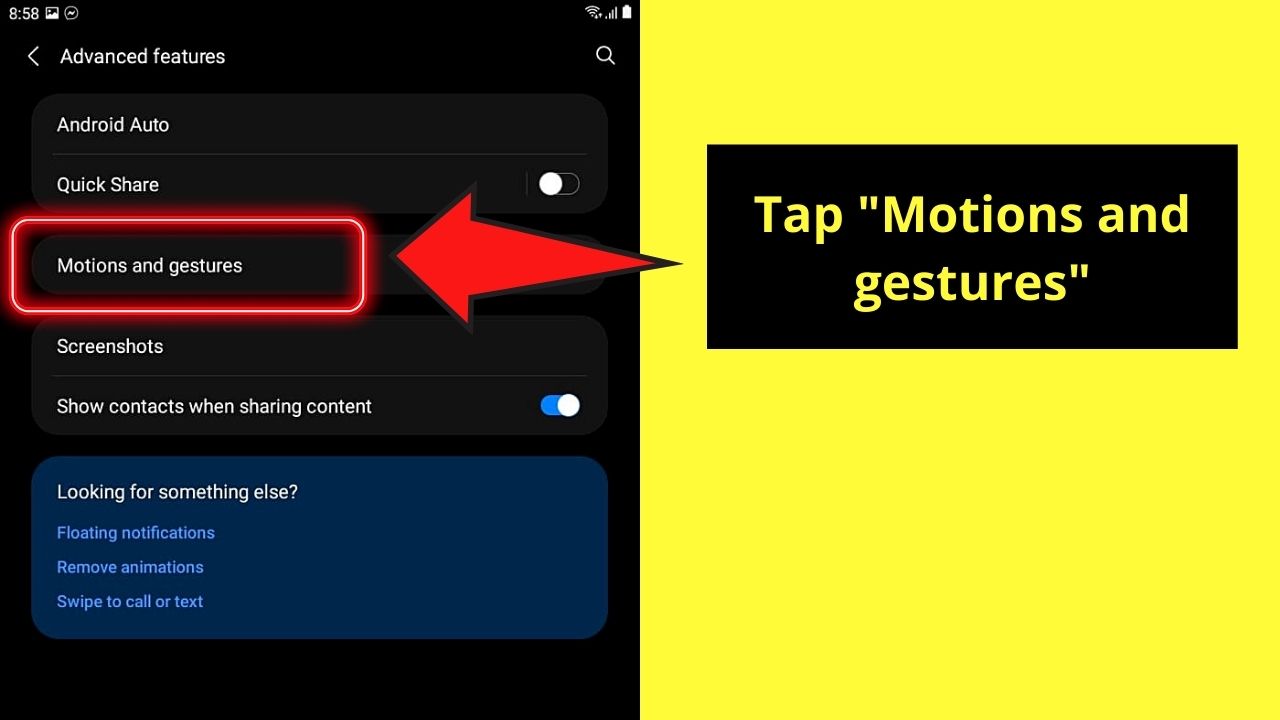 Step 4: Tap the “Double tap to turn on screen” toggle to turn it on. 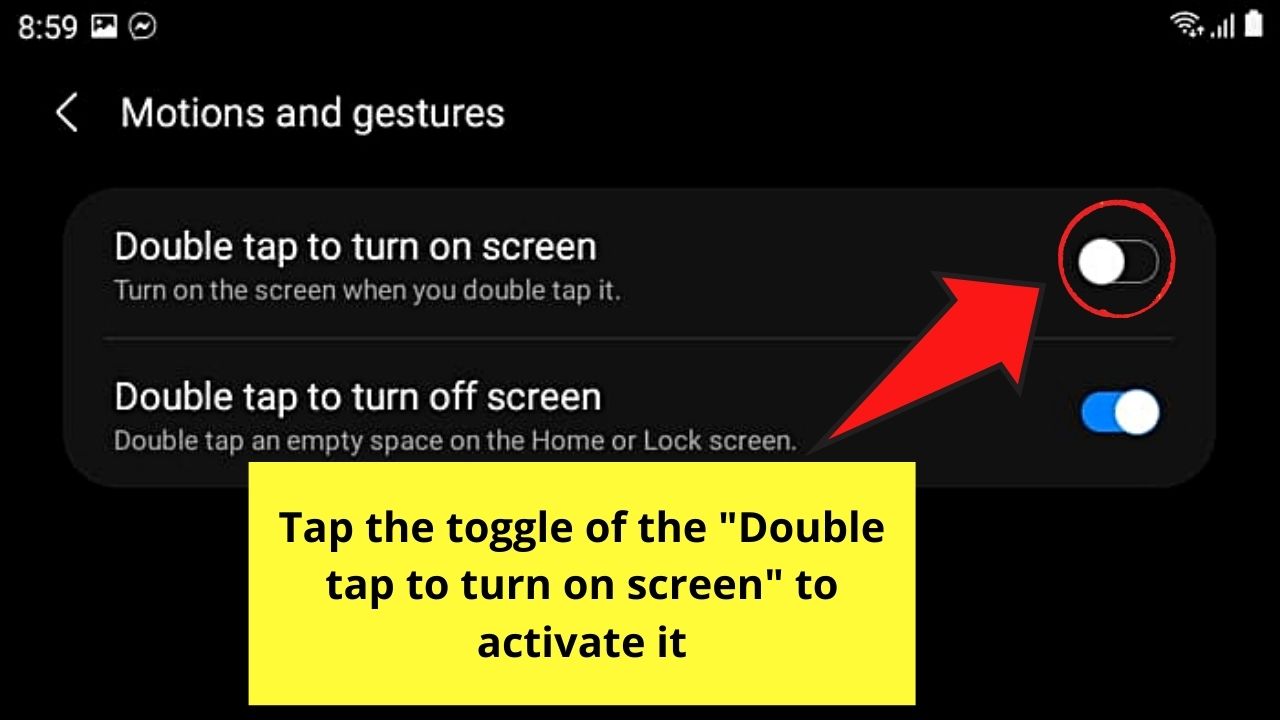 You’ll know you’ve successfully activated the feature as the button turns to a blue color.

You don’t need to be a tech wizard for you to decipher what could probably be causing your Android screen to dim automatically.

So, don’t fret anymore and do some troubleshooting to see what option works best to achieve your goal.

What’s the most common reason for your Android screen to dim?

Why is a proximity sensor needed for our Android devices?

What happens when the Android device’s “Power Saver Mode” feature is turned on?

If the “Power Saver Mode” feature is activated on your Android device, the phone’s screen will dim when the battery levels drop throughout the day.