Quoting on Discord can actually be very useful. On small Discord servers, quoting might not be necessary, as conversations are, in this case, very easy to follow.

However, since public servers started gaining popularity, more and more servers feature a massive amount of members and it gets harder and harder to keep track of conversations.

Sometimes, there are thousands of people in a server.

Now, on these huge servers, especially during peak hours, messages would run past so quickly that it’s hard to find context on the topic.

It would also be sometimes difficult to see which message the person is replying to.

Now, let’s have a look at the different ways you can quote someone on Discord.

Little History on Quoting on Discord

Early on, in a fast-paced text channel, members of the server would tag somebody else to notify them that they have replied.

Next came the update where users could do a code block using markdown.

A lot of people used this to quote somebody on Discord. You can still do this by typing ` or ` ` ` (known as acute, backtick, left quote) in the beginning and end of sentences. 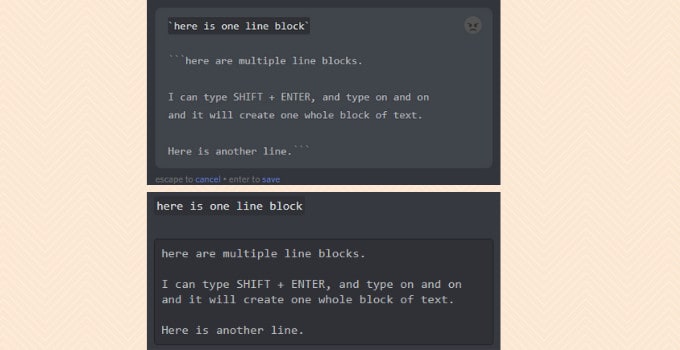 Finally, Discord let users quote others using the symbol >, and then you’ll see your message with a vertical line on the left side.

Here’s How to Quote on Discord These Days

Update on quoting did not stop there. Now, you can hover over any message in the server, click on the three dots on the upper right of the message and then click quote.

This will let Discord automatically do the quote for you and tag the person who sent the message.

For mobile users, you only have to long-press the message and tap on Quote. 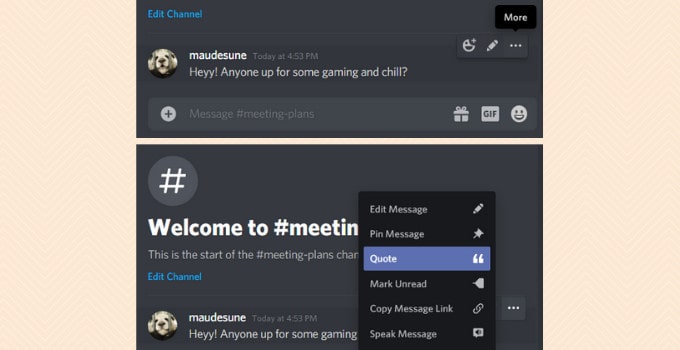 You can still do it manually with > symbol, of course. If you just need one line of quote, press >, put a space and then type your message.

You can also do multiline quotes. After the first line, type SHIFT + ENTER and the quote should continue.

You may also do >>> then another space and then a message for multiline quotes. It’s more work but it does the same job. 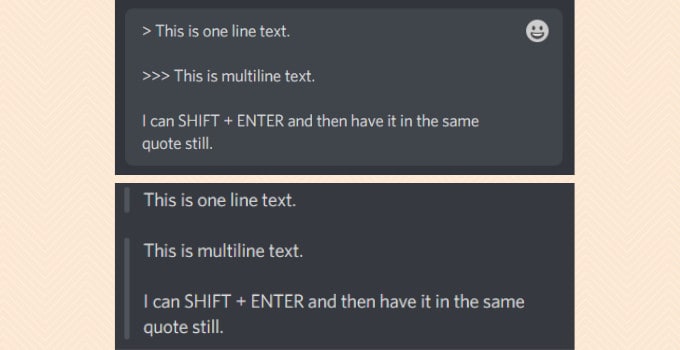 Just a reminder, it is important to put a space always after the > symbol. It won’t work otherwise and there have been people who did the same mistake.

Also, if you don’t have preview on in your Text and Images setting, you can’t do multiline quote with just one > symbol. 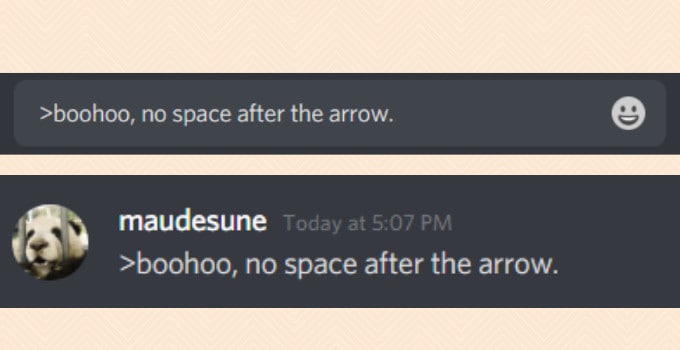 Having Multiple Quotes on Discord

To quote several people, you would need to end the first quote. To do that, you can type SHIFT + ENTER and then use BACKSPACE.

It’s easier just to find the message, hover over it, click on the three dots and clicking quote. Then just do the same on the next message and it will quote multiple people.

Additional Information on Quoting on Discord

Some people have wondered before if the tags work inside the quote. Here is the answer, yes, it does. Which is why, if the original message has several tags and you don’t want them to be tagged again when you quote, remove their tags first before sending.

When quoting, it will copy any markdown edits. So if the original message is bold or italic or crossed out or etc., it will show in the quote line.

So will emojis, provided that you’re able to use that emoji as well. Otherwise it will show as :emojiname:.

Another information you might want to know is that when a message has a quote line in it, only texts outside of the quote line will be quoted.

Here is an example of another use you can do for quoting on Discord. You can use it in a Question of the Week or Question of the Day event. Members in the server who sees this will know that it is for a certain question. 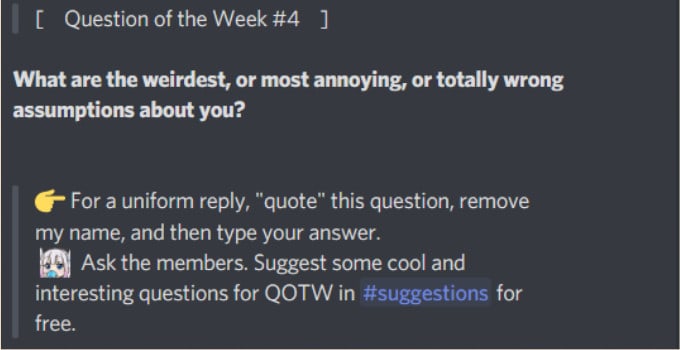 The rest can be some sort of a reminder and quoting them in the message will mean it won’t be repeated again and again unnecessarily.