Using Twitter embeds lets you credit the original source of a quote or comment on WordPress rather than inserting a blockquote.

It helps to give your content more credibility by crediting the original source.

A major advantage of embedding the tweet is that you can embed replies to an original post to show the full conversation. This helps prevent comments from being taken out of context.

Users can also click through to read the content on Twitter, and since it opens in a new tab, it does not lower your bounce rate too drastically.

With WordPress, it is easier to embed because Twitter is a whitelisted website for oEmbed. A URL is all you need.

How to embed tweets in WordPress

Using the block editor, you can insert the embed block or the Twitter block. Both only require the Twitter URL. WordPress automatically embeds the tweet from the URL. Alternatively, you can embed lists using HTML generated from publish.twitter.com. A range of Twitter plugins can be added too.

The block editor has two embed blocks that both convert Twitter URLs to tweets within your WordPress editor using just the URL.

Both of these use the oEmbed function on WordPress to embed content from URLs from whitelisted websites. Twitter is whitelisted so you do not need code. Just the URL. 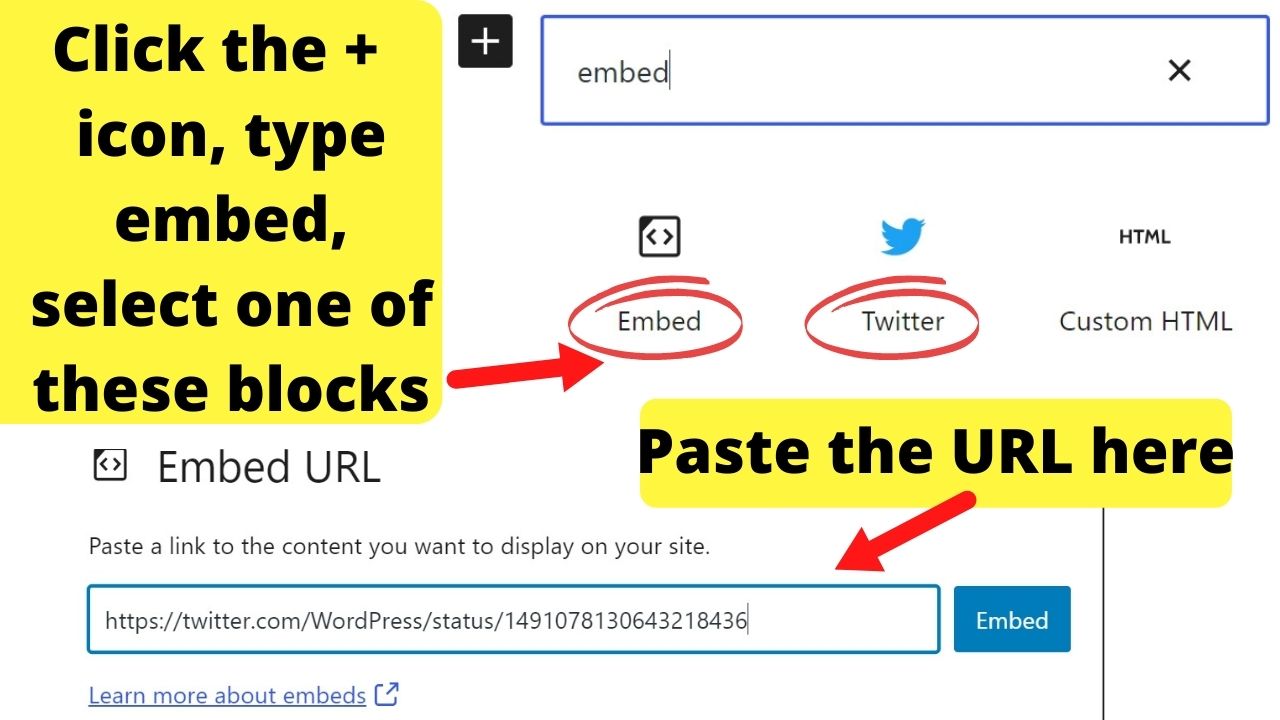 How to embed tweets into the WordPress classic editor

If you have the Classic Editor plugin activated or are still running an older version of WordPress, the steps to embed tweets is slightly different.

All you need is the naked URL and a line break above and below it.

Press the ‘enter’ key once, paste the full URL, then hit ‘enter’ again.

The oEmbed function automatically embeds the tweet from the URL you paste into your editor.

This will not work within a paragraph. The embed is a paragraph on its own – likely to avoid tampering with other people’s original posts.

How to embed Tweets with customizations in WordPress

For websites using a dark color scheme, you can embed dark mode tweets. Just not using the oEmbed function. You need the HTML embed option, which you can only get from the original tweet. 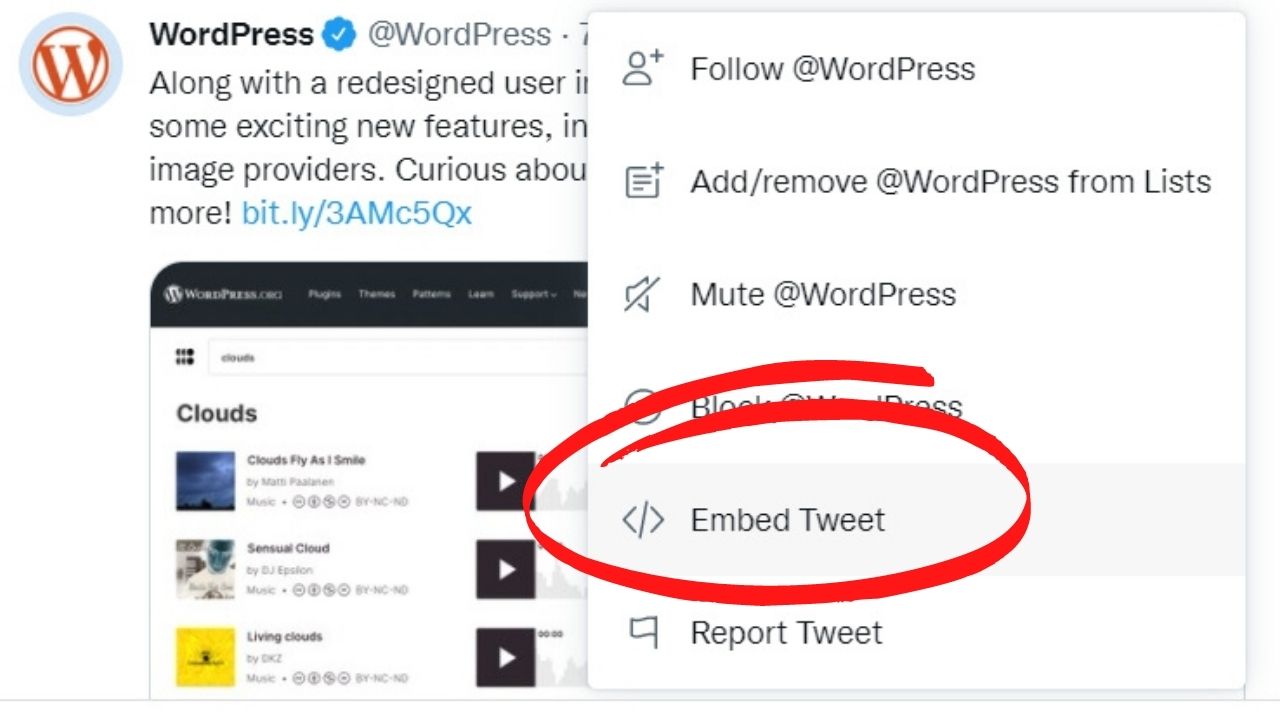 On the next page, select the link that reads “set customization options”.

From here, you can select light mode (white background) or dark mode (black background), and you can also translate the tweet into a different language.

The last option to “hide conversation” is if you want to embed a reply to a tweet on Twitter without including the rest of the conversation.

It limits the context. Without setting this in the additional customizer, the original tweet and the reply are shown so that the full context of the conversation is shared. This can help limit people’s comments being taken out of context. 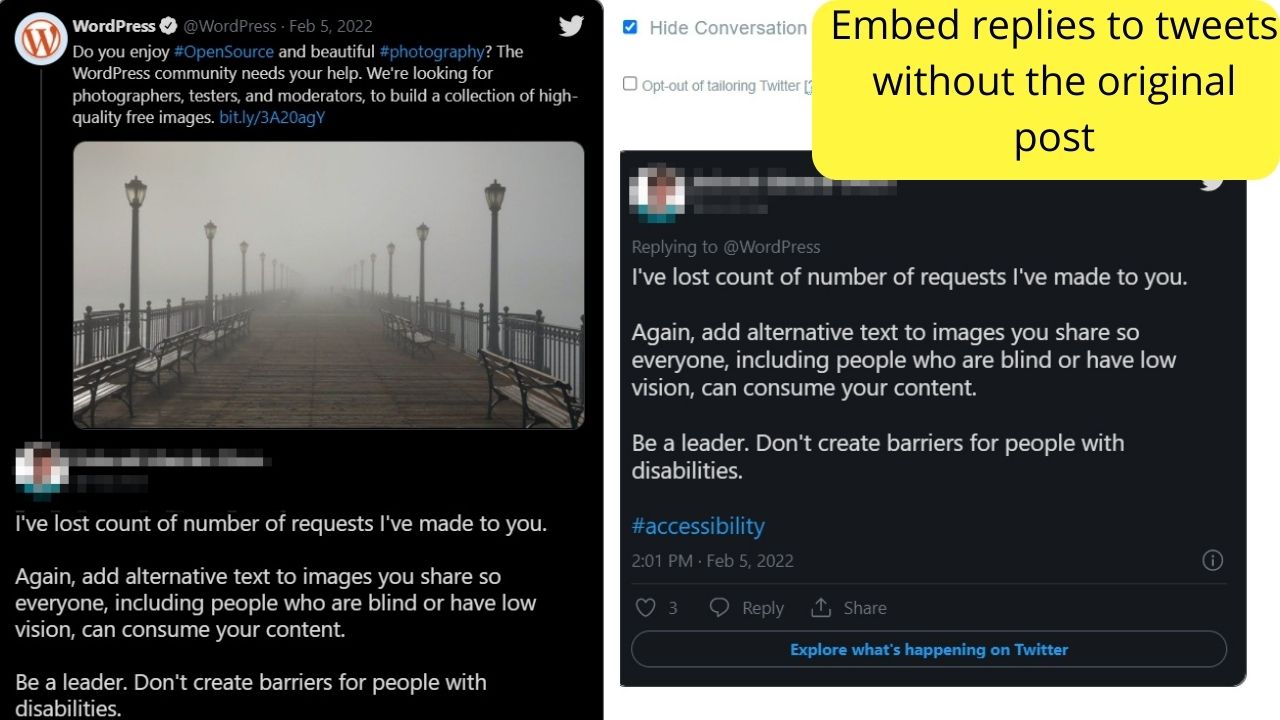 When embedding replies to original tweets, it is a good idea to include the original tweet and the reply. Otherwise, things taken out of context can take a turn for the worse resulting in a Twitter storm for the wrong reasons.

Use the “set customization options” link to change the background color from white to black, change the language or hide parts of the conversation.

These options are not available in the WordPress embed blocks, or via the oEmbed functions which auto-embeds tweets from the URL.

How to embed Twitter timelines, lists, and profiles on WordPress (without a plugin)

One feature not so widely published is the URL for publish.twitter.com.

Use this URL to get embed codes for any profile on Twitter that can be shown on a WordPress website. The only content that will not embed are tweets from profiles that are set to anything other than public.

As an example, should you be writing a piece about WordPress, you may want to embed a list of conversations happening on Twitter from accounts you add to a list, then share by embedding it to WordPress.

This can be done by creating a topic list.

From your profile, create a list, and give it a name, then go to publish.twitter.com and paste the URL to the page with the list you want to embed on your site.

To share these timelines or storylines containing more than a single Tweet, you need to use the HTML code because the oEmbed function does not work for feeds. Only single tweets. 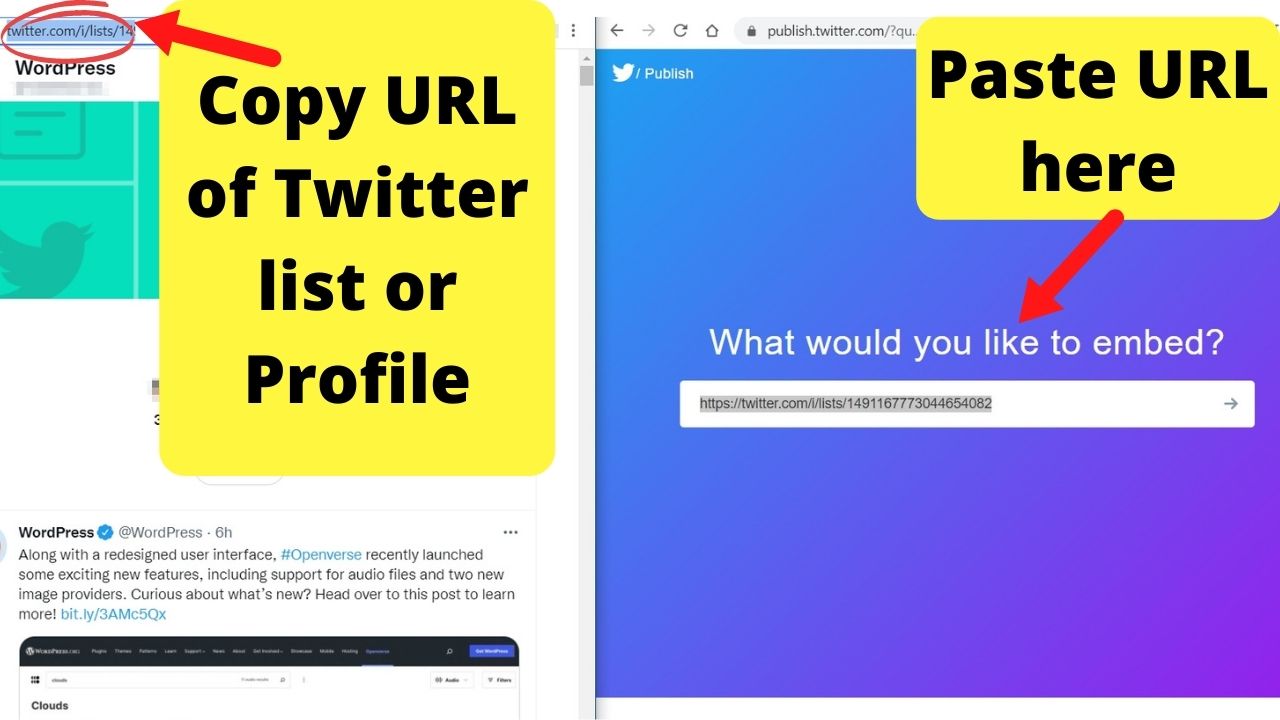 Click on the arrow button to the right of the URL you want to create the embed code for on the Twitter Publish page, then scroll down and click copy.

You should be shown a prompt telling you the embed code has been copied to your clipboard. 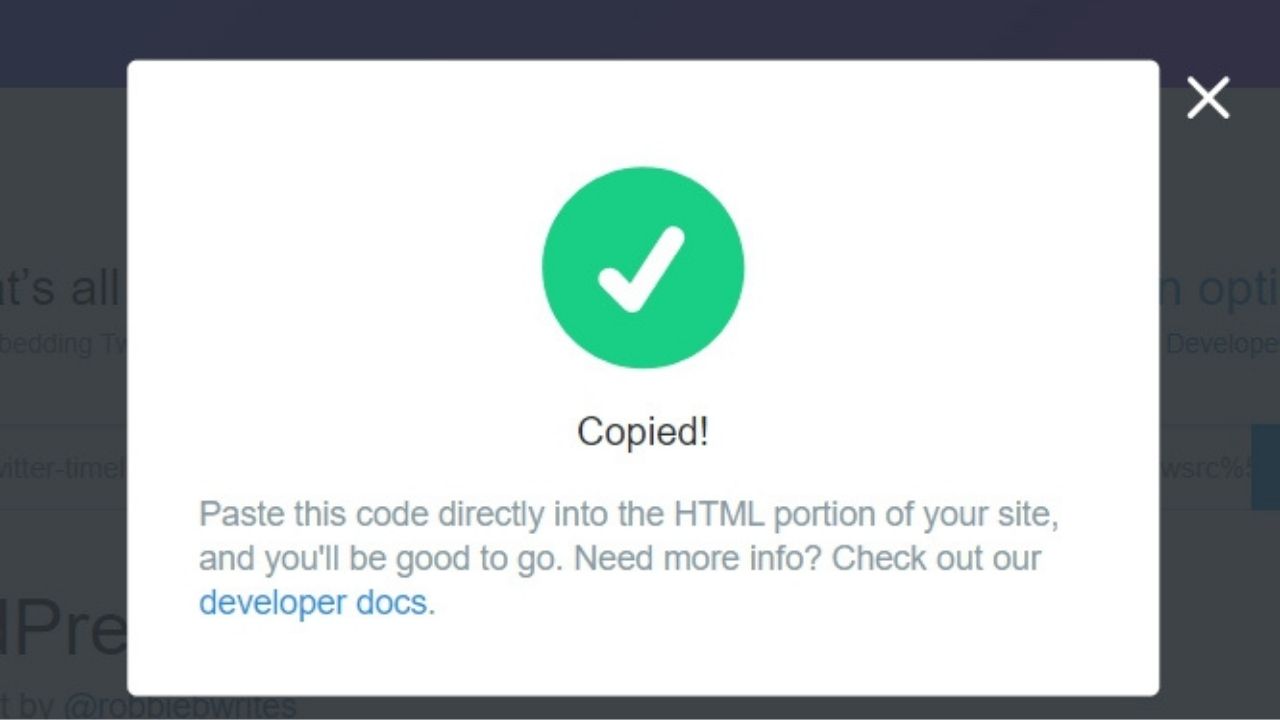 Go back to your WordPress website, and use the HTML editor to paste this into.

Using the Classic Editor, select the “text” mode for your WordPress editor. In the block editor, add the “Custom HTML” block.

When you embed Twitter lists on WordPress, it loads the most recent 20 tweets from the accounts you have added to your lists. When the feed ends, a button shows for visitors to click “load more Tweets”. Then it loads the next 20.

By default, links open in a new tab, however, to maximize your benefit of Twitter list embeds to keep users on your site for longer, create the embed for your Twitter profile. This will create a feed for only your content.

By embedding your Twitter profile feed on your site, either on a page or placed in a widget in the footer or sidebar, visitors will see that you are active on the platform.

This can help drive your engagement up on Twitter.

How to embed tweets easier in WordPress with a Plugin

If you want to create embeds with plugins, you cannot go far wrong with the Custom Twitter Feeds plugin from Smash Balloon. 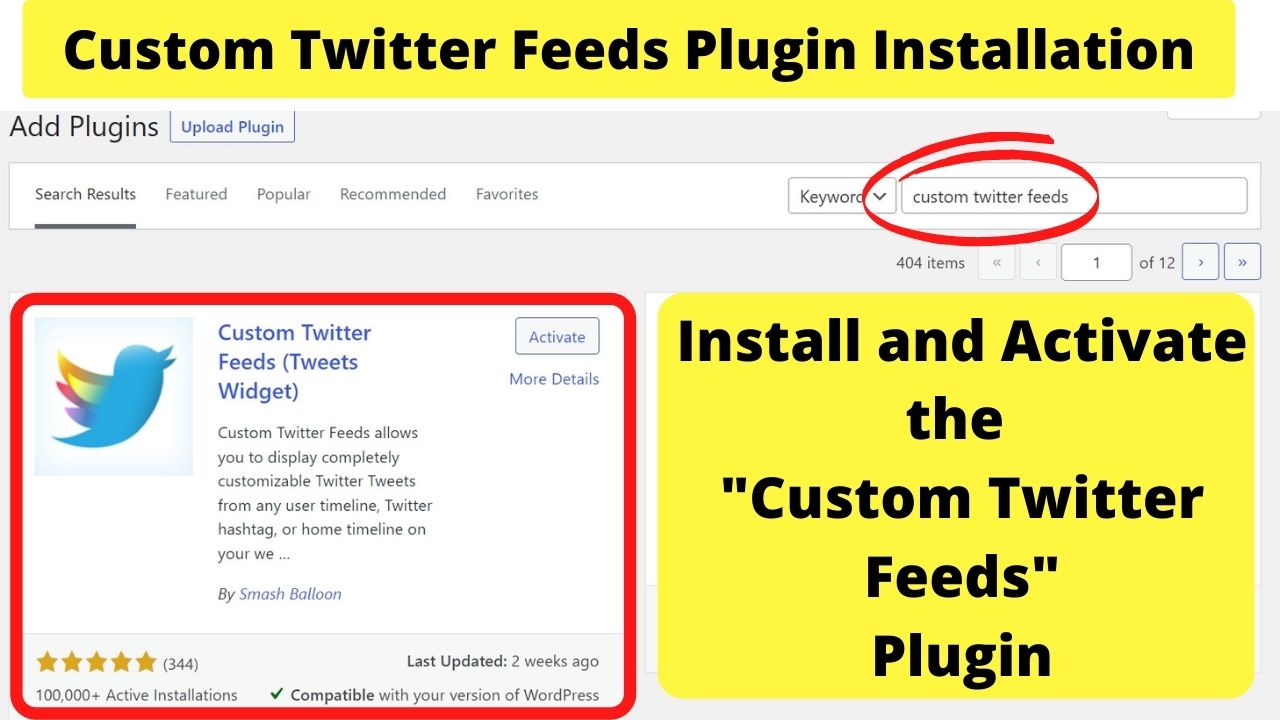 Once the app is authorized, you can configure the settings, and create a custom feed for any Twitter profile.

Once the plugin settings are configured, and saved, copy the shortcode then paste it into wherever you want the Twitter feed to display.

For example, show it in your sidebar, the footer, or create a page or post only for your Twitter feed.

All you need to do is add the shortcode [custom-twitter-feeds].